The singing of a kindergarten class filled the halls of Thomas Jefferson Elementary School’s second floor on a recent afternoon.

The kindergartners, led by long-time Washington Township music teacher David Cona, sang along to a simple, upbeat tune in the waning moments of music class. The song wasn’t something you’d hear at a concert or on the radio. It was just a few lines long and it started with a spelling lesson.

“This is spelled T-H-I-S,” the kindergartners sang in unison.

After finishing the song about “this,” the students sang another song where they learned how to spell a word. Then another. By the time class ended, the group had learned to spell no less than four words in a five minute span, all outside of language arts class.

“It makes it so much more interesting for the students,” Cona said about incorporating other subject areas into music.

Making music class a creative and fun lesson is Cona’s mission every day. A music teacher for the past 29 years, Cona has made a positive impact on students of all ages in the Washington Township Public Schools. His efforts were rewarded this year when he was selected first as Jefferson Elementary’s Teacher of the Year, and then later as Washington Township’s District Teacher of the Year.

“I did really enjoy the high school,” Cona said. “It was fun. But (elementary school) is my wheelhouse. It’s where I belong.”

Cona’s goal every day is to develop the creativity in each of his students. To do this, he not only incorporates different subject areas into his lessons, but shows how music impacts life. Cona discussed one way he combines music and social studies.

“I start in first grade with African music and how the elements are different than European music,” Cona said. “By the time we get to fourth grade and its actually in the curriculum for the civil rights movement, they already have a good basis for how the music is different. So when we talk about American music, they talk about a blues song and say, ‘this is what I heard in that African song’ or ‘that’s what I heard in that European song.’ That allows us the time to talk about the social aspects of it.

“Music is a truly interdisciplinary class,” Cona added. “It’s why it’s called a related art: it’s related to everything else.”

Cona captures his students as soon as they enter his classroom. Jefferson Elementary principal Gary Breen said it is common to see Cona with his guitar playing a song as his students arrive for class.

“(Cona) has the unique ability to adapt his teaching style to match the age level of the children in his class throughout the day, from the bunny hop to music composition,” Breen said. “His highly engaging lessons are crafted to meet the needs of every learner in each class through his use of music, movement and hands-on experiences with a variety of instruments.”

Cona has also been a big part of the growth of Thomas Jefferson Elementary’s drama club. Cona took over as moderator of the club in 2013 and gave the students the ability to create their own productions.

“I was doing choir and the kids wanted to do more and more, but I didn’t have the rehearsal time to do more songs,” Cona said. “I took over the drama club because I knew there was a position available. I took some of the choir kids and asked them, ‘what can we do in between songs to connect them?’”

Each year, Cona has given the students more freedom with the show, to the point where he said this year, the students are basically creating the entire production themselves.

“They came up with the songs and ideas,” Cona said. “They write the script. I hold auditions to give people the parts. But they write all of the lines, they do all of the choreography themselves … they make the props, they do the scenery. If you go to other elementary school productions, you might see better scenery because the parents get involved. With us, everything is done by the students.”

“One of the reasons I came to this district was because of how much they support the arts,” Cona said. “I think it’s a great sign that they would pick an arts teacher to be teacher of the year. It’s quite flattering because everyone who was (selected) certainly deserved it.” 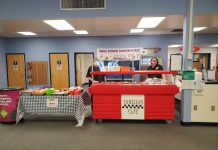