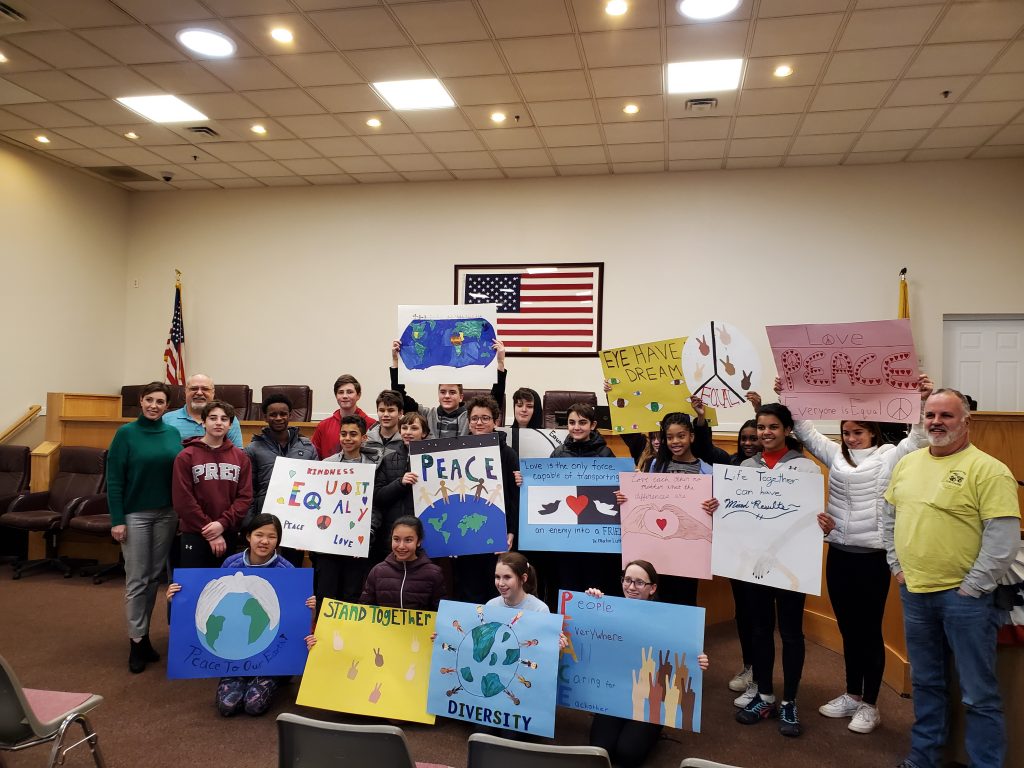 Pre-K to eighth grade students gathered in the auditorium that Monday to watch the video production, “Martin’s Big Words,” based on King’s life and work. On Tuesday, several teachers cited the artwork of Goya and Kathe Hollwitz depicting war protest. Teachers and students looked at art as protest during 1945 and the civil rights movement.

Throughout the rest of the week, students dissected Dr. King’s 1957 sermon, “Loving Your Enemies”; read “Happy Birthday Martin Luther King,” by Jean Marzollo; discussed songs of protest; created posters based on Dr. King’s “I Have a Dream speech”; and discussed the novel “Of Mice and Men,” all so students had opportunities to consider issues of class, gender and ability.

While the week featured several different lesson plans for each grade, the eighth grade spent one day simulating the 1965 march from Selma to Montgomery, Alabama, that resulted in a violent clash between police and protesters. The students marched from Westfield to the Cinnaminson municipal building and presented the township committee with a petition requesting that the Cinnaminson government represent the demographic makeup of the surrounding community.

“The township committee was delighted to meet with eighth grade students and teachers from Westfield Friends School and to be a part of their celebration of Dr. Martin Luther King Jr’s birthday,” said Mayor Ryan Horner.

“We were all very impressed with their march to town hall as they honored the successful civil rights initiatives of Dr. King.  As an equal opportunity public employer, we were honored to spend some time with a very mature group of young people who understand and appreciate the importance of equal opportunity and service to community,” Horner added.

According to Westfield Friends Head of School Margaret Haviland, the students are currently heading into the Civil War within their social studies curriculum. The timing of Dr. Martin Luther King’s Day of Service presented the students with an interesting opportunity.

“In their own social studies program, they [students] are heading into the Civil War and they are at the place where the gag rule came about, where Congress wouldn’t allow any petitions to come forward dealing with enslaved people,” said Haviland.

“So for them, it was a great moment where they could see how important that was and what it meant to be taken away.”

Accompanying students during their march to the municipal building were posters that depicted these various messages. One showed an earth with people of blue, orange and other colors uniting to demonstrate that skin color doesn’t matter. Another poster depicted people in different clothing to show it doesn’t matter what people wear or what gender they are.

“For us, given that these are young children, [the march] felt good and felt appropriate,” noted Haviland. “Also, because the children are much more diverse than the faculty and the township that they live in, I think it was a good thing to think about.

“What kind of world they want to live in.”