‘Our last chance to save it’: Kingston fighting foreclosure 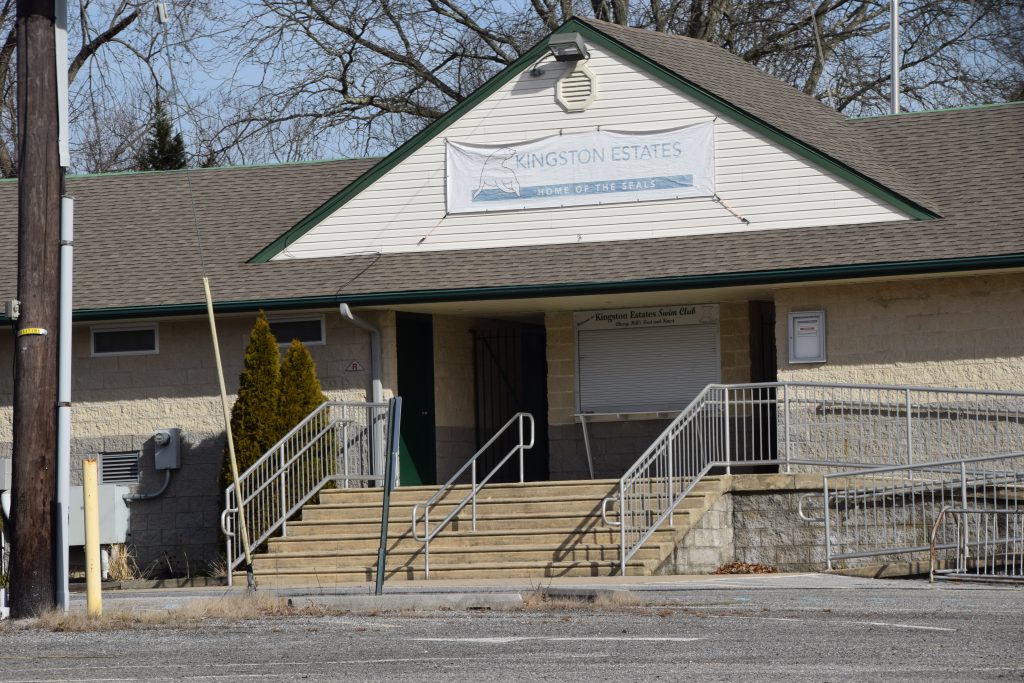 Foreclosure may be imminent for Kingston Estates Swim Club, but its membership isn’t going down without a fight. As it stands, Kingston owes around $400,000 to TD Bank, but the club is currently attempting to raise $100,000 in pledges in the hope that the one time sum of money will incentivize TD Bank to forego foreclosure proceedings.

The club held a meeting on Friday, Jan. 24 at Resurrection Catholic School and Preschool for their membership and the greater Cherry Hill community to spread the word about their fundraising efforts.

George Muench, the club’s treasurer, opened the meeting by providing some historical context behind the fundraiser. In 2005, Kingston’s walls were beginning to crumble, so the club commissioned a feasibility study to determine if they should rehab the building or build a new structure. Ultimately, they decided to knock down the old building and start fresh.

In February 2006, they took out a loan with TD Bank, but the club ran into additional costs when they encountered unforeseen foundation issues. So in April 2006, they went back to TD Bank and asked for an additional $500,000 on top of the initial loan.

Around 2011, membership was steadily declining and, with it, the club’s revenues. They began to default on their loan, and the club entered into a forbearance agreement with TD to delay foreclosure until December 2012.

All the while, Kingston’s revenues were steadily declining. In 2005, Kingston was annually bringing in around $200,000. In 2019, the club brought in only $69,000, which Muench said doesn’t cover their operating expenses let alone their loan payments. Muench said when they most recently went to TD Bank, they had no financials to show them and working something else out just wasn’t feasible.

According to Muench, TD is proceeding forward with foreclosure and has ordered an appraisal of the property. He said at their current rate, they’ll most likely seize the title to the property within the next two to three months and will have a sheriff’s sale in about six or more months.

Muench said Kingston’s goal is to show TD some sort of financials. He said his research has shown that “bad loans” can typically be forgiven for 25 cents on the dollar, so he calculated that if Kingston can generate $100,000, TD may be inclined to cease their foreclosure proceedings.

He said there’s no guarantee that even if they raise $100,000, TD will negotiate with them. For that reason, the club is currently only asking for pledges.

Community members were asked to fill out a form or send an email to the club indicating how much they are willing to donate. The two-week fundraising effort will take place until Sunday, Feb. 9. At that time, the club will sum up their total number of pledges and approach TD Bank to tell them how much they expect from pledges.

Martha Gaston, senior corporate communications manager at TD, said the bank could not comment on the matter.

“TD Bank’s customers expect that their transactions with us will remain confidential,” Gaston said. “For that reason, TD cannot further discuss the details of this matter other than to affirm that the bank strives to work with all customers to avoid litigation if possible.”

Greg Geraci, a board member at Kingston, said the fundraiser isn’t just about saving the pool itself, but also saving the land. He said the property could be sold to a business that would generate more congestion and traffic in the neighborhood.

“This is kind of our last chance to save it,” he said.

Kathleen Stankus, the aquatic director at Kingston, said the club has a strategic new business plan if they get out from under the loan. She said they’re working on bringing new summer camps in, a new snack bar owner and new swimming school programming. Stankus said the club is also slated to host the Tri-County Swimming Championships in 2021. The host organization typically brings in between $30,000 to $50,000.

“I do believe that with our loan debt cleared and a bit of teamwork from our membership, we can make Kingston a premiere club in Cherry Hill again,” Stankus said.

Those in attendance at Friday’s meeting lamented the thought of the pool closing. Mary Beth Neiman said the pool was a special part of her children’s childhood and how she came to make friends herself.

Carol O’Neill said the club holds a special place for her family as well. She said she was hopeful that the Kingston and greater Cherry Hill community could meet the fundraising goal.

“To have that sense of community that [Kingston] provided was […] I couldn’t put a dollar figure on that; it was truly priceless,” O’Neill said.

All pledges are due to Kingston Estates Swim Club by Sunday, Feb. 9. Those interested in pledging can do so by contacting the club via email at KESCPledge@gmail.com.