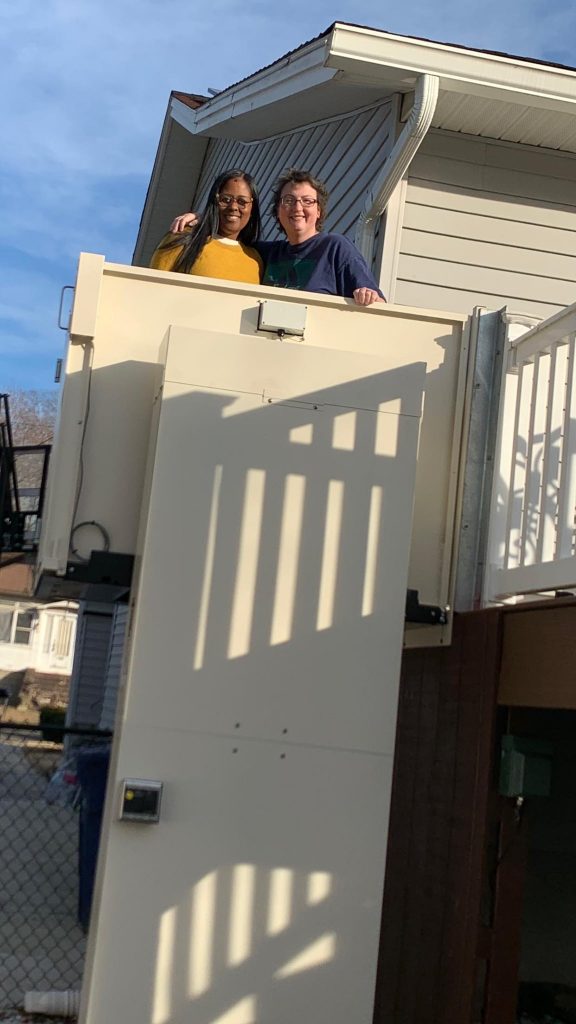 Sometimes, when life knocks you down, the people in your life can help raise you back up. In Kathy Campanella’s case, it was the Moorestown community that gave her a lift.

Campanella was the recipient of a GoFundMe campaign in August that generated more than $5,000 to finance the purchase of a wheelchair lift for her home. In early January, the lift was installed, and Campanella, who has been battling cancer since 2011, said with it came a renewed sense of independence.

“It’s just given me so much independence,” Campanella said. “I wasn’t really able to do anything. [Now,] I can go out and ride the wheelchair around the block.”

Campanella was diagnosed with stage 3 breast cancer in 2011. In January 2014, the cancer metastasized to her bones, and by the following January, the disease had spread to her brain. Last summer, Campanella was undergoing a new round of treatments when she woke one day and was unable to walk.

After a round of steroids and a few other medications, she could walk again, but she was using a walker to get around. Then her doctors informed her that her disease would progress to the point where she’ll be wheelchair bound.

All the while, the steep stairs leading to Campanella’s front door were getting increasingly difficult, so she started researching ramps and lifts to install over her front steps. But the high prices proved unfeasible with the cost of her treatment adding up, so she took to Facebook to ask if anyone had a lift that they could donate.

Enter Danielle South. The fellow Moorestown resident, who’d only met Campanella once,  offered to start an online crowdfunding campaign to get Campanella the lift. In seven days, the campaign exceeded its fundraising goal with friends, family, township neighbors and strangers chipping in.

South said helping Campanella get the lift was a bright spot in the past year.

“It’s been great knowing I was able to play a small part in helping make life a little bit easier for Kathy,” South noted. “It affirmed what a great community we live in.”

Following the August fundraiser, one of Campanella’s neighbors who installs elevators offered to install her lift for free. While the money was raised months ago, the lift had to be ordered from the manufacturer, and when it finally arrived, both the state and township had to inspect and permit the device. The township kindly waived the permit fees for Campanella.

The device is already changing Campanella’s life. There were times when she couldn’t manage her front steps so she just didn’t leave the house. When she did leave, her husband either carried her down the stairs, or she leaned on both him and her son for support as she made her way down.

These days, Campanella can’t stand for very long and can only walk short distances. But with the lift and her electric wheelchair, she can do some of the simple things once again — like meet her daughter at the bus stop.

Campanella is grateful for the Moorestown community and everyone who showed their support. It hasn’t stopped since the summer. Since she can’t stand for very long, cooking is difficult, but friends and neighbors regularly drop off meals. During the holidays, an anonymous stranger left the family gift cards.

Campanella’s life has done a full 180 in recent months. She said the campaign showed her she’s surrounded by support and it gave her back her drive to fight the disease.

“Before that, I was not looking good,” Campanella recalled. “I really thought I was done. It was horrible.”

She’s started another round of chemotherapy, and while she doesn’t have her three-month markers back from her doctors, Campanella said she’s feeling better than she has in the recent past. Prior to the crowdfunding campaign, she was in bed constantly, but these days she finds herself going out with her family more.

“That’s God and the help of everyone else,” Campanella insisted. “It’s so much easier to give up. [But then] you see the love and support of everyone.”