Lenape High School paraprofessional Lynn Stow believes no one is too old to learn something new.

Stow doesn’t just believe in that philosophy, she’s lived it. A paraprofessional for 14 years, she went back to college to earn her bachelor’s degree 10 years ago at age 50 and has taken courses in a wide variety of subjects to better help her special needs students.

“All you needed for this job as a para is to have your associate’s degree,” Stow noted. “I just wanted more. I just wanted to show the students you could achieve more.”

Stow’s love for her job and dedication to it was recently recognized when she was honored as Lenape High School’s 2019 Educational Services Professional of the Year. The announcement was made during a pep rally at the high school prior to the holiday break in December.

“I had my reindeer sweater on,” Stow said, laughing about the holiday-themed outfit she wore that day. “I was dressed for the occasion. You can tell I had no idea.”

Congratulations to Mr. Mike Curcio for being recognized as Lenape’s Teacher of the Year and Mrs. Lynn Stow as the Educational Services Professional of the Year. Thank you making us better. pic.twitter.com/WKAuWsc7vf

Stow received the honor after dedicating her career to special needs students for more than two decades. Prior to working at Lenape, she worked at home as a preschool teacher and day care provider for special needs students. Fourteen years ago, Stow arrived at Lenape as a paraprofessional permanent sub, working one on one with a student. That position would lead to a full-time role at the school.

During her time at Lenape, Stow has served in numerous roles. After her first one-on-one student graduated, Stow was shifted to provide in-class support in a biology class. She later worked in several special needs programs in the building.

In whatever role she’s had at Lenape, Stow always looked for opportunities to better herself. When she was working in biology, she went back to school to take classes in the subject so she would be more helpful for her students.

“I always have felt that if you’re placed into a position to better support the students, you should know what you’re talking about,” Stow said.

Stow needed to do a lot of studying last school year when she returned to being a one-on-one paraprofessional. She was assigned to work with a completely blind student who began attending the school in 2018. When she began that work, Stow admitted she knew nothing about Braille, a form of writing used by the visually impaired.

To gain knowledge, she took courses at the Hadley Institute for the Blind and Visually Impaired. Stow used what she learned to help support her student.

“I Braille her worksheets on a daily basis,” Stow explained. “I’ve learned how to sight read. I can’t finger read, but when she has anything in front of her, I can tell her, ‘OK, you don’t want that paragraph, you want to go to this paragraph.’

“The biggest challenge was learning Braille and knowing her technology,” Stow added. “She was a transfer student, so it was a late enrollment. They didn’t know she was coming until August. So there was no way for me to prepare ahead of time.”

Stow also has learned how to get creative to help her student learn. In one recent instance, she helped her student learn about the anatomy of a cell by sketching out a diagram on paper and then using a hot glue gun to trace the diagram, creating a manipulative study material where the student could feel the parts of the cell.

Stow’s creation of the cell diagram is just one small example of how she finds creative ways to help her students. One of the most gratifying parts of Stow’s job is seeing the students she works with progress through high school and eventually graduate. Stow is  still in touch with the first student she worked with one on one more than a decade ago.

“You may not always see the fruits of your labor,” Stow said. “All you can do is plant a seed and hope it will grow later.”

Stow refuses to take much credit for the award she received. She insists the many teachers she’s worked alongside at Lenape High School deserve much of the credit for inspiring everyone from students to administrators to keep learning.

“I got the award, but it’s been the inspiration of the teachers of the rooms I sit in,” Stow insisted. “As a para, I get the opportunity to go into different classrooms because you follow the student. I see so many of my colleagues and they have impacted me to want to learn.

“I think it’s them that deserve the award.” 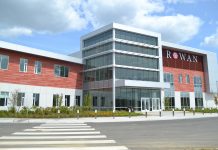