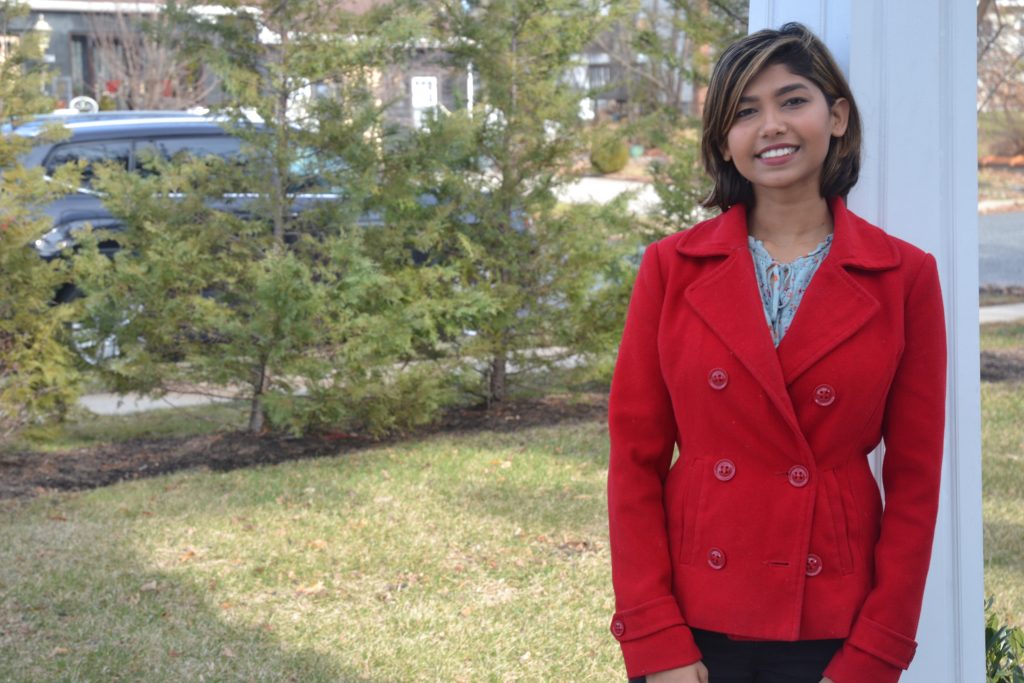 For 23-year-old Jinnia Nusrat,  Mother Teresa has long been a role model. So it’s that when Nusrat departs this January for two years with the Peace Corps, her journey will parallel the Catholic saint’s journey in some way.

Born in Bangladesh, Nusrat and her family immigrated to the United States on a Diversity Visa when she was about 12, in pursuit of a better education system and more opportunities. Nusrat attended John A Carusi Middle School and Cherry Hill High School West before studying at Rutgers University-Newark.

From a young age, Nusrat envisioned becoming a diplomat one day, so she majored in political science with a minor in international affairs. Her school required 54 hours of community service a year, and through that requirement, she quickly learned she had a voracious appetite for service.

“It made me happy; it makes me feel a little bit brighter,” Nusrat said.

Prior to attending Rutgers, Nusrat had never heard of the Peace Corps, but when she perused the university’s page for recent graduates, she came upon the organization, and something just clicked.

A bit hesitant about the two-year commitment, she decided to defer the Peace Corps for a few years and instead joined AmeriCorps. Upon graduating, she worked for the city of Newark as part of its sustainable environment team, and the work brought her a deep sense of fulfillment.

“We did a lot of work to keep the community clean, to find out what their needs were,” Nusrat explained. “I loved my field work — talking to community people and getting to know them.”

When her time with AmeriCorps was up, Nusrat was a research associate for the Center for Innovation in Mental Health–City University of New York (CUNY) Graduate School of Public Health and Policy. But the Peace Corps was still on her mind. So she applied in May, 2018,   and waited patiently for three long months.

But once she snagged an interview, and once accepted, things quickly fell into place. The last several months have been spent completing the medical and legal requirements and preparing for the journey ahead.

While the Peace Corps often assigns volunteers their locations, Nusrat chose Albania. She was reading through the Peace Corps’ descriptions of all the countries it serves, and the way the Peace Corps referenced the Albanian people, history and culture just resonated.

Nusrat will set off on her journey as a health education volunteer on Jan. 17. For the first three months, she’ll live with a host family in Albania as a way to learn the country’s language and culture. After the three-month training period, she’ll be assigned to a community in Albania to live and work with the locals for 27 months.

Nusrat’s particular interest is in public health. She said she may be assigned to a middle or high school where she’ll help teach students about hygiene, pollution and reproductive health. She noted that she can relate to some of the cultural stigmas around these discussions because in Bangladesh, teachers were often shy or reluctant to discuss those  health topics.

Once in Albania, Nusrat won’t return home at any point until her service is complete. She doesn’t wholly plan on disconnecting though. She’s interested in starting a blog to document the journey and highlight the culture and language as she learns more about them.

When Nusrat returns, she will still have her eye on becoming a diplomat one day, or maybe even working with the United Nations. She’s not certain just yet, but in the meantime, she plans on getting as much as she can out of her experience with the Peace Corps.

“I plan to give so much as well,” she said. “This is what I’m passionate about.”