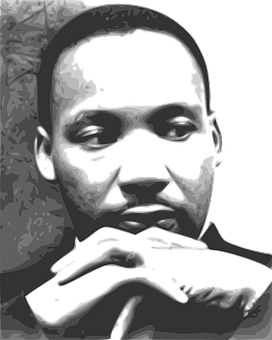 Dr. John Moore, a world-renowned King portrayer, will lead the first community-wide Dr. Martin Luther King, Jr. celebration as he performs excerpts from some of the civil rights leader’s most famous speeches.

Growing up in Philadelphia, Moore would attend King celebrations, but in his experience, MLK events often revolved around current events. He felt the celebrations were absent King’s words and spirit.

When Moore was about 11, he looked for a hero, and when he began listening to King’s  words, the latter became that hero. Moore started memorizing King’s  speeches, not for any particular reason other than they brought him a sense of hope and fulfillment.

Little did Moore know, but his ability to recite King’s words would one day get him invited to prisons, schools and churches to perform.

His life became a constant state of rehearsal. Moore learned the entire “I Have A Dream” speech from beginning to end within two weeks at the age of 11. He said despite not having the best memory when it comes to things such as names or grocery lists, he somehow has no issue with King’s speeches.

“I know this was something I was called to do,” he said of the anomaly.

In the years that followed, he perfected King’s pace and cadence. He listens carefully to the preacher’s pauses and pronunciation of words. Moore said for him, performing King’s speeches is akin to a singer practicing a song: It just takes a lot of practice.

These days, he’s gotten to the point where someone could stop him on the street and he could perform on command.

On Jan. 19, Moore will give a 30-minute presentation, with excerpts from five of King’s sermons. Fifteen students from the Moorestown School District — along with Superintendent Dr. Scott McCartney — will be in attendance. After the performance, students will ask Moore questions about King, and he will answer in character.

Jonathan Leath, co-pastor at Converge Church, said he was familiar with Moore’s work as a King performer through a national prayer call in which both Moore and Leath participate.  When Leath told his co-pastor at Converge, George Bowen, that the Moorestown Ministerium Anti-Racism Task Force was interested in hosting a community-wide King event, Bowen said he’d seen a King performer in Pennsylvania Leath should reach out to: It was Moore.

While Moore was already booked for MLK Day, Leath said the task force was still interested in having him perform — regardless of the day. So, it scheduled Moore’s visit for the day before.

Moore said his performances are an opportunity to relive history first-hand, and in doing so, to create a space for conversation.

“A lot of things can be healed within community conversations and by discussing the issues,” he maintained.

Leath said Converge has invited state Sen. Troy Singleton, elected officials, community leaders, business owners and any community member who is interested to the free event. He said the community-wide celebration of King perfectly underscores what the church is all about.

“We’re actually living out what Dr. King talked about,” Leath said. “We do not want Sunday to continue to be the most segregated day of the week.”

The free MLK event will start at 3 p.m. at Converge Church, 802 N. Lenola Road in Moorestown. For more information, contact Pastor Jonathan M. Leath at (856)234-3791, ext. 11 or via email jleath@myconvergechurch.com.