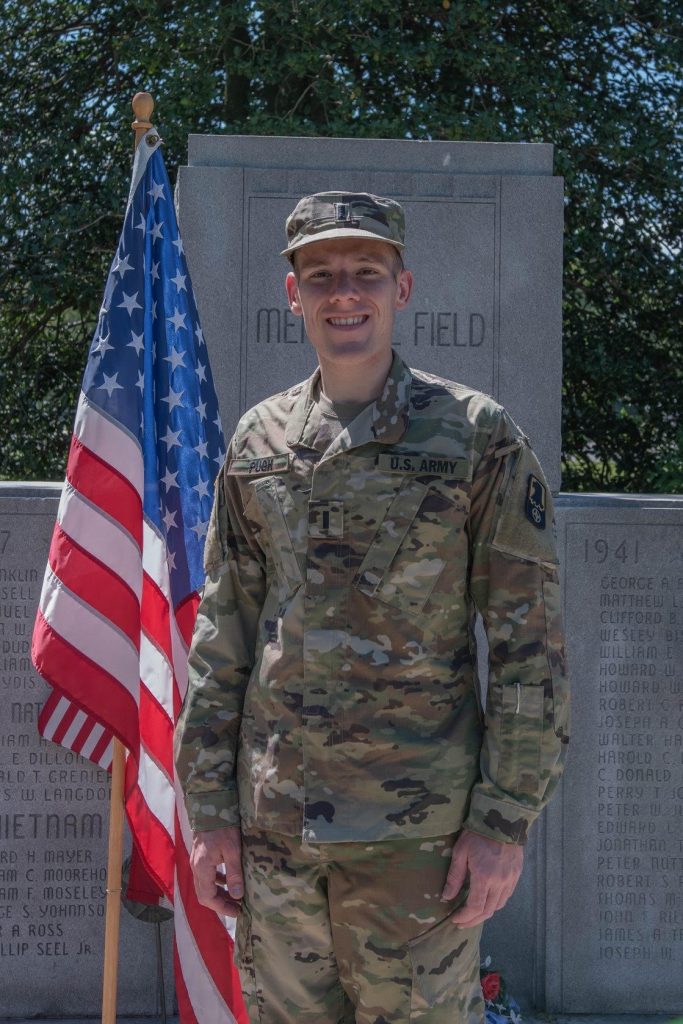 Brandon Pugh has gone from serving on the Moorestown Board of Education to serving his country. In December, Pugh graduated from The Judge Advocate General’s Legal Center and School in Virginia as a Judge Advocate in the United States Army Reserve.

The product of a military family, Pugh has long had a desire to serve. During his time on the school board, he brought recruitment opportunities to Moorestown High School, and  relationships with the military earned him the title of honorary commander with the United States Air Force and Army.

While the desire to serve was always there, the timing was never quite right. In May 2018, Pugh graduated from Rutgers Law School, and in October, he passed the bar exam. Shortly after, he nabbed a position as legislative counsel with the New Jersey General Assembly in the Minority Office.

Last winter, Pugh decided it was time to just jump in, so he put applied for the Army reserve. When he interviewed for his position with the state assembly, he informed his employers he had an interest in serving. When the time came for Pugh to start basic training, the state body was accommodating and held his position.

Pugh embarked on his journey toward becoming a JAG officer in the summer of 2018. The training consisted of two parts. The first was basic training, which wasn’t specific to his job within the military. Pugh then learned the military fundamentals before departing for more specialized training in Charlottesville, Va.

While the civilian and military sides of law have many similarities, there are some aspects of military law that just don’t overlap with the civilian side, according to Pugh. At The Judge Advocate General’s Legal Center and School, Pugh studied the four main blocks of JAG instruction: criminal law, contract and fiscal law, national security law and administrative and civil law.

Members of the military have different rights, which means certain crimes are military-specific. Pugh said for instance, when a civilian employee goes AWOL from a job, an  employer can’t put that person in prison.

So despite already having a law degree, JAG officers have to learn about the rights and procedures related to military specific crimes. These can be as low level as what happens when a solider breaks the chain of command or as high as knowing when it’s legal and ethical to engage a target. Pugh said ultimately a JAG officer’s role is not to make decisions but to advise his or her commanders.

“Judge advocates are there to give them a framework,” he explained.

On Dec. 12, he was one of only 117 to graduate from the 209th Judge Advocate Officer Basic Course (JAOBC). He chose the Army because it’s the branch with the largest JAG core. Despite being a more elite subset of the military, this means if he wants to specialize, there are more opportunities at his disposal.

Upon graduating JAG school as a First Lieutenant, Pugh was assigned to the 244th Expeditionary Combat Aviation Brigade on the state’s Joint Base McGuire-Dix-Lakehurst.  He said the reserves offer him the best of both worlds, allowing him to have his civilian job and life while still serving his country.

In a few weeks, Pugh will be off to Fort Benning in Georgia for about six more weeks of training before making his return to Moorestown. There’s something about being on a base, surrounded by pilots and soldiers, that makes Pugh feel he’s contributing in a larger way.

“You definitely leave knowing that you’ve done something really important.”

Sign of the times: Moorestown High student thanks ‘heroes of 2020’