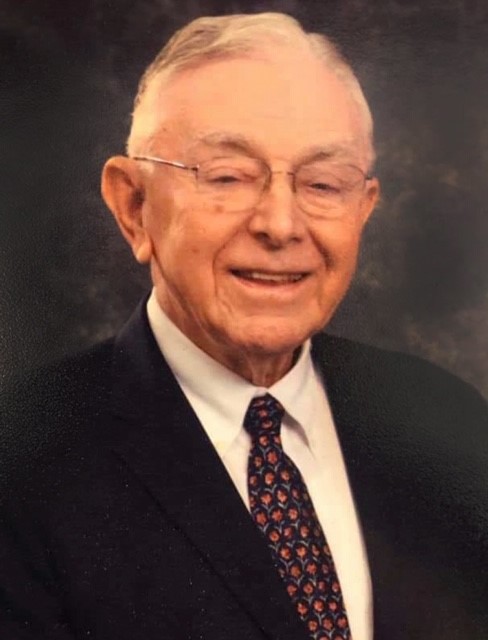 Joseph S. Holman of Moorestown died peacefully the morning of Dec. 12 after a stroke suffered earlier in the week; he was 93. The executive had overseen the growth of a business that his father had founded in 1924 as a single Ford automobile-and-tractor dealership, to what would become Holman Enterprises, a diversified international company of nearly 7,000 employees.

Joe was born in Philadelphia in 1926 to Katherine K. and Steward C. Holman, and grew up in Pennsauken and Merchantville where he attended public schools. He was an outstanding high school basketball player — league MVP as a senior — as well as playing trumpet in the marching band and eventually becoming its drum major. His musical skills appeared to diminish in his adult life, despite occasional energetic forays into New-Years-Eve entertainment. Joe met his future wife, Jean Preston Polk, at Merchantville High School. Their relative academic achievements at Merchantville were a matter of some dispute over their 59-year-long marriage, with each claiming superior class rank; that mystery was never fully resolved. Despite the controversy, they were blessed with good friends from Merchantville their entire lives.

Joe graduated from high school in 1944, and despite medically-recommended and concerted carrot consumption, did not have the vision required to pursue his dream of flying in the Army Air Corps. He enlisted instead in the Navy, where he achieved the rank of Radio Electronics Technician, 3rd Class. He often averred that his most significant contribution to the war effort was plugging in a movie projector that his shipmates could not start, thereby preventing a mutiny.

After leaving the service in 1946, Joe attended Princeton University on the GI Bill. He played varsity basketball at Princeton for four years, winning the Bunn Trophy (team MVP) twice, and at points leading the nation in free-throw percentage. His Princeton teams, playing under legendary coach Franklin “Cappy” Cappon, won the Ivy League title his junior year. Joe described his academic performance as somewhat less-than-legendary, however; in the spring of his senior year, he skipped classes for three months to finish his thesis.

Joe graduated from Princeton in May of 1950, and married Jean Polk one month later on June 24. He briefly considered attending Wharton Business School and discussed that possibility with his father. Steward seemed less convinced of the benefits of further education, telling him, “You graduated from high school, you served your country, you went to Princeton. If you want to ever work in this company, you’ll show up at 9:00 Monday morning.” Joe showed up at work on Monday, July 1, at 9:00 a.m. He continued to show up at work for the next sixty-nine years, working until his health finally failed him at the end of his life.

Joe oversaw the transformation of his family’s company from a regional retail-automotive business to an international powerhouse comprised of six distinct companies. Deservedly touted as a great businessman, he gave his full energies to his work. What distinguished Joe, however, were his kindness and humility, qualities not typically associated with business success. He also had real faith in, and love for, his “people,” a telling word that he always used instead of “employees;” to him, they still were always people first — with real lives, loves and struggles — and workers second. Even at the end of his life, there was nothing he enjoyed more than speaking with “his people.”

Joe was an avid golfer for most of his life, and enjoyed memberships at Merchantville, Tavistock and Pine Valley County Clubs. Some of the closest friendships of his adult years were formed and cultivated on these fairways. Jean was typically not as enamored with his time on the links, an opinion she gladly shared with him.

Joe was pre-deceased by his parents and by his sister, Eleanor Andreola; his wife, Jean and his sister-in-law, Helen Peitz. He is survived by a large and loving family: his sons, Jeff and Steve (Georgine MacGarvey); his daughter Mindy (Frank Beideman); his nephew Robert Andreola (Janet); his nieces Kathy Mullin (James) and Sue Moonan (Mike); his sister-in-law, Elizabeth Soderland; his granddaughter, Ashley Shaw (Steve); his grandsons, Jeff (Sara Bemkins) and Brett Holman, and Brad and Joe Beideman and innumerable other nieces and nephews, and grand-nieces and -nephews. He is also survived by the companion of his final years, Peg Tomlinson and his caregiver, Maddy Santiago.

Visitations will be held Wednesday, Dec. 18, from 5:30 p.m. to 8:30 p.m. and Thursday, December 19, from 9 a.m. to 11:15 a.m. at the First Presbyterian Church of Moorestown, 101 Bridgeboro Road in Moorestown. Services follow at 11:30 a.m. Interment will be private. In place of flowers, memorial contributions may be made to: Urban Promise, PO Box 1479, Camden, NJ. 08105. Condolences may be left at www.lewisfuneralhomemoorestown.com.