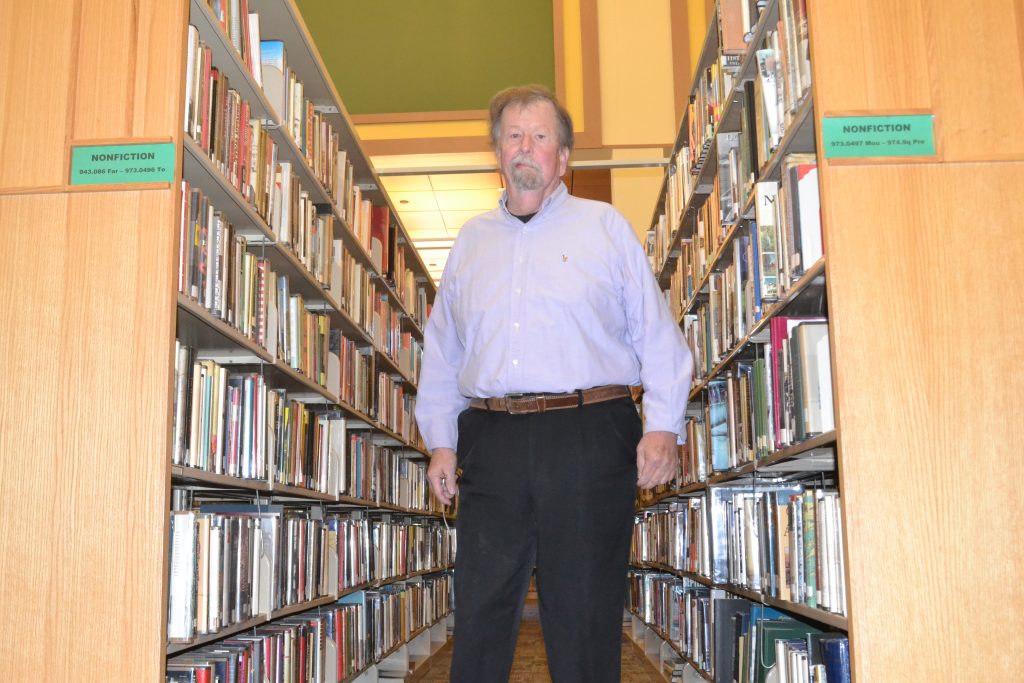 Joseph Galbraith has had an adventurous spirit since childhood. His father was an outdoorsman who instilled in Galbraith a love and respect for the environment, so he grew up hunting, fishing and snowmobiling. As a child, mountaineering books were his escape of choice.

The Moorestown Library has been Galbraith’s 24-year-long summit, and he’s ascended to new heights in his role as library director, having seen more visitors frequenting the establishment today than 10, 15 or even 20 years ago, with nearly 400 people passing through on any given day. It’s fitting, then, that come Dec. 17, Galbraith’s adventure will come full circle when he retires to live on a mountain in Vermont.

Galbraith was born in Toronto and raised in Buffalo, N.Y. He was a biology and chemistry double major at Northeastern University in Boston where he was on the school’s competitive ski team. During that time, the team frequently traveled to Vermont for competitions, and he fell in love with the area. He made a promise to himself that one day he’d live there.

He’d planned on attending veterinary school, but when he was waitlisted at Tufts University, his academic advisor told him there was a job opening in Northeastern’s chemistry library where he could work while he awaited his fate from Tufts. The job ultimately changed Galbraith’s entire trajectory, and sure enough, he was soon hooked on the idea of working in a library.

He earned a fellowship to attend graduate school at the University of Buffalo where he earned his master’s degree in library science. Upon graduating, he moved to work at Clemson University’s library for a time before getting hired by EBSCO, one of the largest library services companies in America.

In June 2007, he was promoted to his director role, but despite the title, he’s always considered himself a “boots on the ground” kind of leader. He said he’s done it all during his time in Moorestown, from manning the reference desk to running programs and even cleaning the bathrooms. But he said that’s par for the course at the library, and every person who works there does the same.

“We all wear a whole lot of hats because we’re all in this to get one thing done and that’s to serve the citizens of Moorestown,” Galbraith said.

He’s worked hard to cultivate a welcoming atmosphere. He pointed out they’re not the type of library that “shushes” or prohibits you from bringing in your cup of coffee, but that wasn’t always the case. Shortly after becoming director, he found that staff were spending the bulk of their time just policing people who’d brought in a beverage or who were speaking. So, he decided it was time to loosen the reins.

“You’ve got to roll with the culture because, after all, this is the town’s library; we’re just the stewards,” Galbraith said. “So, I wanted to create an environment that said, ‘You know what? This is the township’s living room. Come in, and hang out.’”

During his time in Moorestown, Galbraith increased circulation, expanded adult programming and grappled with a tight budget year-after-year, but he said his proudest accomplishment was playing a role in moving the library to its new facility in 2014.

They’d outgrown their old space, and for years, the township was in constant talks about creating a new facility. There was years of talk but no action, which Galbraith said taught him a great deal of patience as they worked with all of the local stakeholders to build their new space. Galbraith said when they finally moved in, his team decided they were going to reimagine their services from the ground up, and he said while he’s played a part, it’s, without a doubt, the Moorestown Library staff who make the library the thriving community space it is. He said they’re what he’ll miss most after he leaves.

“As I’ve told anybody who listens, it’s not about me; it’s about the people who work downstairs,” Galbraith said. “They’re the ones that make this place special.”

Having recently turned 65, Galbraith said now felt like the right time to retire. He said he’s looking forward to spending his free time skiing in the winter, fly fishing in the summer and cherishing the moments in between with his grandson.

And he’s certainly not done adventuring. Having already visited Mount Everest once, Galbraith has plans to return to Nepal in September. He said there’s just something fulfilling about being out in nature.

“You realize how small and insignificant human beings are in the face of natural things,” Galbraith said.