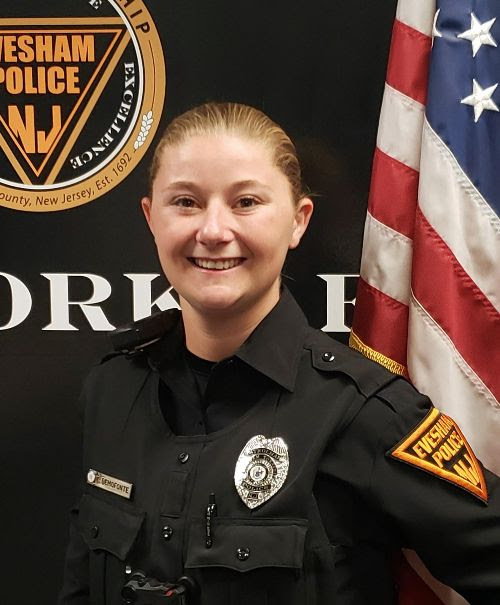 Having grown up in a family of law enforcement officers, pride and accomplishment were the pillars of Kellie Demofonte’s childhood. As she grew up, she realized she never lost those qualities, and they served her well throughout her adult life.

“I always had a burning desire to serve and give back to the community that has given me so much. I was a police explorer within the department during three of my four years at Cherokee High School and eventually achieved the rank of Lieutenant,” Demofonte said.

Demofonte was hired by the Evesham Police Department in November 2018 as a Class II officer, a position that enabled her to get a behind-the-scenes look at the department from court functions to patrol work. She was most recently promoted to the rank of full-time officer and was honored as Officer of the Month in October 2019 for assisting young children in a tragic situation.

“To be a part of a department that encompasses the core values of teamwork, fidelity, integrity, and public service is everything I have ever wanted to do in my life, and more,” Demofonte said.

“Classes were offered at a variety of times and locations allowing me to continue both. One of the other major factors that I considered prior to enrolling at RCBC was its affordability. The price per credit was untouchable by other universities, especially for the quality of education I received,” Demofonte said.

When asked about her experiences at RCBC, Demofonte commented on the openness of professors who appreciate questions and assist students who need extra help. She also enjoyed the camaraderie exhibited by peers during group projects and exam preparation.

During her free time, Demofonte enjoys saltwater fishing and surfing during the summer months. She also likes to work out because her job requires her to be in top physical shape.

“I enjoy any activity that gets me outdoors from hiking to having a catch with a football or just laying on the beach,” Demofonte said.

Patrol officer arrests suspect in act of burglary and theft