Four teens on mission to ‘put good back into the community’ 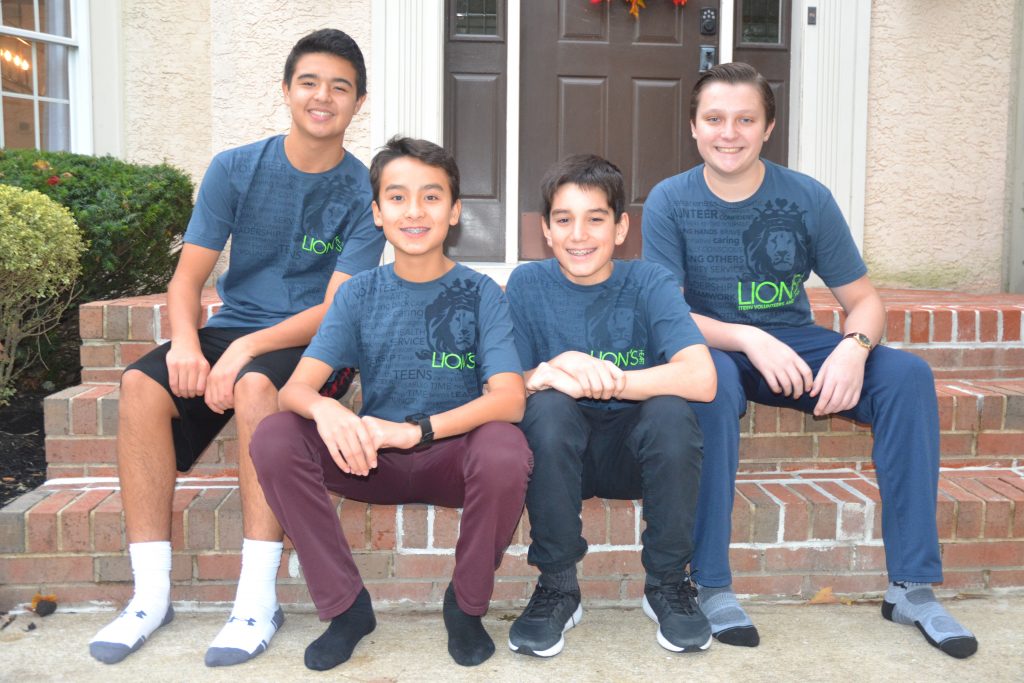 You might have recently passed by them at the Moorestown Library. Four Moorestown High School freshmen on a mission to do good were stationed in the lobby ready to take leftover Halloween candy off your hands and donate the sweet treats to military personnel and first responders.

The candy collection was the latest in a series of good deeds for the freshmen. A few months ago, Dylan Mies, Evan Schaffer, Adam Connor and Lucas Megill founded a Moorestown chapter of Lion’s Heart. The national nonprofit connects teens with local volunteer opportunities and offers strategies for teens who want to serve their local community.

Kate Mies, mother to Dylan and class coordinator for the Moorestown chapter, said prior to starting high school, the boys were interested in volunteering, but they were often too young or didn’t know where to seek out opportunities. When she found out about Lion’s Heart, she thought it sounded like the perfect opportunity for her son and his friends to start giving back.

“I thought it was a great opportunity for them to have their own platform where they could either collaborate with another organization or come up with their own projects that they could do,” Kate said.

Her search revealed there were chapters in Haddonfield and Medford, but none in Moorestown. So, in their eyes, it only made sense to create their own chapter.

“If you’re going to do community service, you want to give back to your own town,” Kate said.

Kate completed a background check with Lion’s Heart, took a few classes and, before she knew it, they were up and running. Mies, Schaffer, Connor and Megill have been friends since kindergarten, so the four became the chapter’s founding members.

The national chapter serves as a vehicle for projects sending out emails in which they inform their members about nearby volunteer opportunities. It was through one of these emails the Moorestown Chapter discovered Operation Gratitude, a nonprofit that sends care packages to military personnel and first responders. They ultimately collected four boxes and four trash bags of Halloween candy from the Moorestown community to send to Operation Gratitude.

But they’re also seeking out their own opportunities and ways to offer support to other organizations. The boys recently made more than 500 sandwiches while volunteering with CommUNITY SJP, a local nonprofit that seeks to promote civic engagement across the South Jersey and Philadelphia region.

During the holiday season, they’ll be joining forces with Project Night Night, a charity that donates night packages with items such as throw blankets and stuffed animals to homeless children. To spread the word, Schaffer said they plan to email as many people in the community as possible and ask the Board of Education to help. They are currently thinking of other ways to engage the community in the collection drive. He said they’re still figuring out the place where they’ll receive donations.

While the chapter is still very much new and just getting off the ground, they’re hoping to spread the word that they’re here to help in any way they can.

“Lion’s Heart is really just a vessel to make sure we can take volunteering and give back to the community,” Connor said.

They’ve got a handful of other projects on the horizon. Kate said they’ve been in talks with Ronald McDonald House in Philadelphia about how they can best serve them, and they’re in the process of working out a “Songs for Seniors” program where they’d go into nursing homes and elderly care communities to perform music.

She said right now their membership is small as they test the waters and work on getting the chapter off the ground, but they’re definitely open to the idea of adding more members in the future.

For the four founders, the overwhelmingly positive response to their efforts has shown them they are on the right track.

“It’s really just a good way to put good back into the community,” Megill said.

Anyone with a service project that they’d like to have Lion’s Heart involved in can contact the group at LionsHeartMoorestownBoys2023@gmail.com. To learn more, visit lionsheartservice.org.