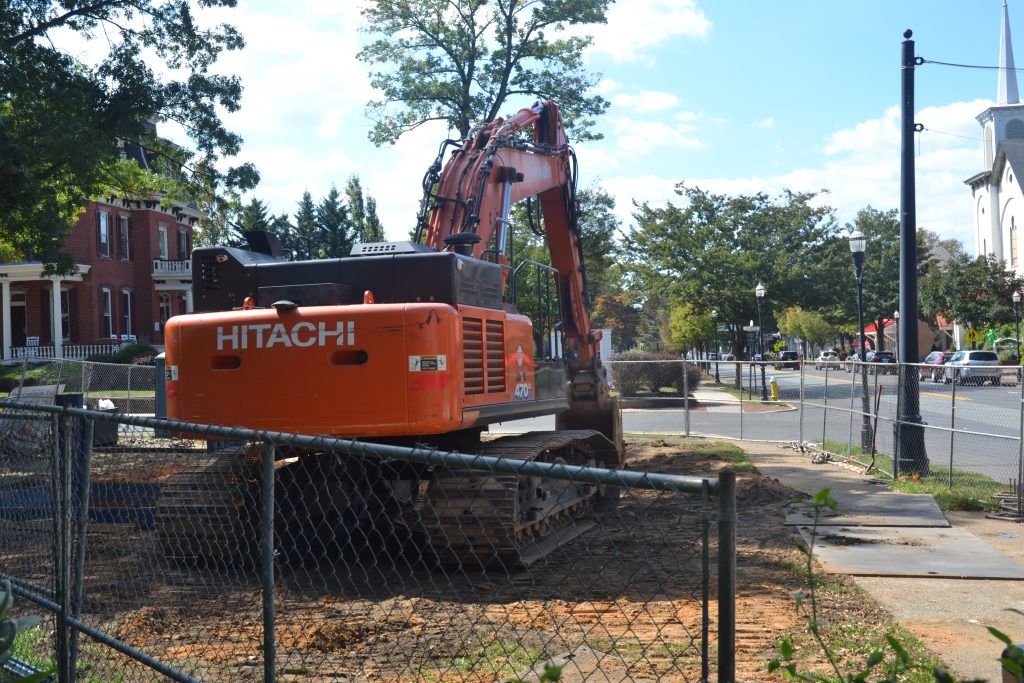 The end may soon be near. After sitting barren and unoccupied, the remediation at the Percheron Park site on Main Street was expected to come to a close at the end of September. If the state Department of Environmental Protection gives the site a clean bill of health, the site can finally be developed into the park that the Friends of Percheron Park group has been patiently waiting for the green light on for more than a decade.

Puritan Oil Company, Inc., a subsidiary of Global Partners LP., is responsible for soil remediation at the site. Liz Fuller, a spokesperson for Global Partners, said Puritan Oil said during the week of Sept. 16, approximately 60 percent of the excavation work at the site was completed. Nearly 600 tons of petroleum impacted soil were removed off site and disposed off at a NJDEP permitted facility. She said they expected the remainder of the excavation work and backfilling to be completed the week of Sept. 23.

“This week Global anticipates completing soil remediation at the site. A soil remediation report will be prepared by GES and submitted to the New Jersey Department of Environmental Protection,” Fuller said in a statement on behalf of Global Partners. “We understand that there will be an opportunity to start site development after DEP completes their administrative and technical review of the soil remediation report. Global will then conduct ongoing groundwater monitoring as required by the DEP.”

Township Manager Thomas Neff said, in the last few weeks, Global Partners has been communicative about its schedule and expectations. He said his understanding is that it could take up to six months for NJDEP to sign off on the site. So, in the meantime, they’ll be collecting information about the site specifications and going out for bids, so that as soon as the site is cleared, they can get to work.

In 2008, the township purchased the Percheron site at the intersection of Main and High streets. The site was formerly a gas station, and the township purchased the property with the contingency that the previous owner would be responsible for the soil remediation. In 2011, members of the Garden Club approached council with a landscape plan for a park at the site.The Friends of Percheron Park was formed that same year, and the nonprofit has been raising funds to bring the park to life ever since.

Kathy Logue, president of the Friends of Percheron Park, said the Friends were “thrilled” to hear that the excavation was happening. She said they’re planning for a spring 2020 build.

As presented by the Friends, the park will feature a life-sized bronze statue of a Percheron stallion. The horse, to be named Diligence, will serve as a tribute to Moorestown history. In 1839, Moorestown native Edward Harris II brought the first Percheron stallions to the United States from France.

In the meantime, the Friends are in the process of updating cost estimates, which were last calculated in 2014. She said their statue costs have increased nearly $28,000 in that time, and they’re still seeking updated costs on other elements of the park such as benches, signs and landscaping.

Logue said all of the donations they’ve collected to date are sitting in an interest-bearing account with a current balance of $95,000. While they haven’t heard back on all of their estimates yet, Logue said she anticipates that they’ll still need to raise somewhere between $30,000 and $50,000 to complete the park.

“We thank the neighbors of the park for understanding their inconveniences during the remediation and future construction of the park will result in a park for which we can all be proud – an oasis on Main Street where we can sit and enjoy the view, meet our neighbors and appreciate our heritage,” Logue said.

To learn more about the park or how to donate, visit percheronpark.org.