Residents and committee members of Voorhees Township discussed topics much larger than the municipality Monday, Sept. 23, including anti-Semitic language from the current Trenton City Council President as well as the potential of additional environmentally friendly initiatives.

Stuart Platt, a Voorhees lawyer, resigned earlier in September as the City of Trenton’s redevelopment attorney to protest an offensive statement made by Trenton City Council President Kathy McBride, using the phrase “Jew her down” while discussing a legal settlement.

At the committee meeting Monday, Platt thanked Voorhees Township for including a resolution on the agenda “condemning the anti-Semitic comments” made by McBride, as well as two additional councilpersons.

“I want to thank the governing body for actually taking a stand this evening in considering passing this resolution, condemning the anti-Semitic slurs that were made by the council president in the City of Trenton, as well as two council people.

“I’ve always said that anti-Semitism is the low-hanging fruit of racism and seems to be the only form of racism which appears to be tolerated in this country. By this governing body taking a stand … and calling it out for what it is, I think that makes everyone in New Jersey proud that you would take this stand,” Platt added.

As read by solicitor Howard Long before its passing, the resolution by Voorhees Township calls for the immediate resignation of McBride, as well as fellow council members Robin Vaughn and George Muschal.

Deputy Mayor Jason Ravitz also commented on the resolution, saying the slur used is “one of the most offensive things that you can say to a Jewish person.”

“New Jersey, Camden County and Voorhees Township, in particular, are melting pots – and to have our kids read this stuff, to have anyone read this kind of hate in 2019 in a public forum … it’s an emotional subject for myself, but I want to thank everyone on committee.”

“I’m a grandmother of four, and I’m very concerned about what we’re leaving for them,” said Gupta. “We go through life easy without thinking about tomorrow, and I think it’s time we woke up.”

Gupta says she’s been amazed to see how little knowledge her friends and others know about recycling standards across Camden County, with a major emphasis on plastic bags.

Resident Susan Festa also spoke during public comment, asking about potential progress on the banning of plastic or paper bags within Voorhees Township or at the state level. According to township officials, they have voted in favor of restrictions across the state through resolutions of support.

However, committee stated that there are concerns about being the first to do so before the state sets its own standards, that Voorhees would then have to follow anyway, as doing so ahead of the state, by itself, could drive away business due to restrictions and potential added costs.

“I think there’s concern from some local businesses … about the competitiveness that they would have versus Berlin Borough, Berlin Township, Evesham Township and Cherry Hill … if we were to go off on our own,” said Ravitz.

Festa said she, regardless, still urges committee to look into the potential of doing so as a municipality due to how long matters can take at a state level.

Two resolutions were passed on second reading during the meeting, one regarding the updating of the township’s regulation of smoking on township property, which now includes electronic cigarettes ands similar devices, and another regarding the hours of operation for gasoline stations unless granted permission by the township.

The second reading of an ordinance was tabled regarding the regulation of massage establishments within Voorhees Township. According to Township Administrator Larry Spellman, a challenge from a local business warrants further discussion on the topic before being voted on. 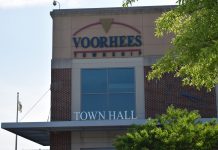 Voorhees committee to host its first job fair on June 21