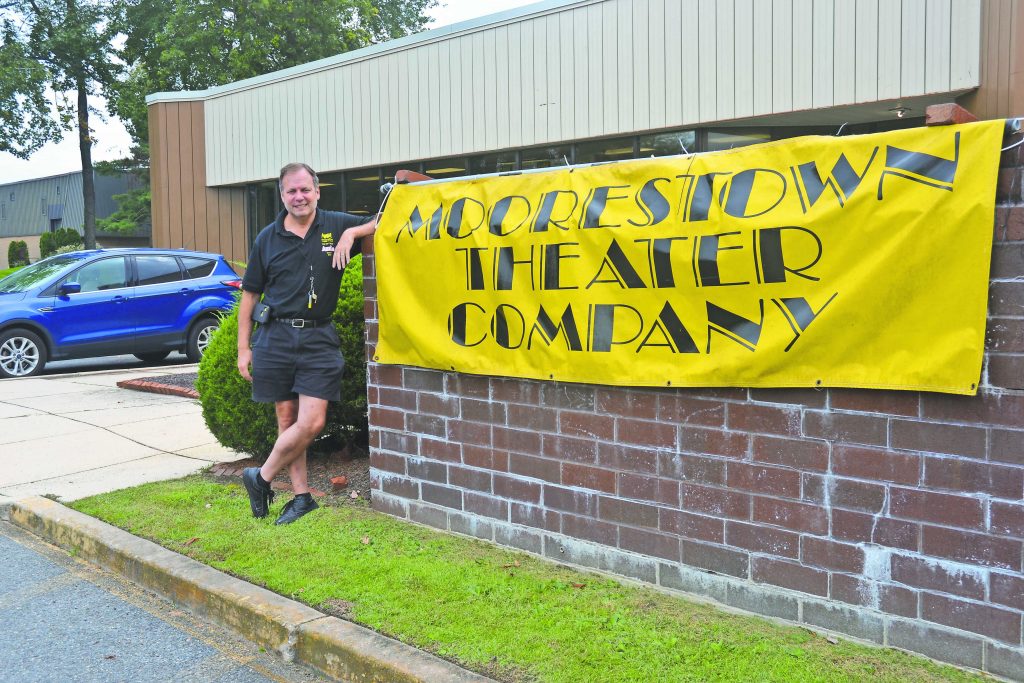 Mark Morgan said some theater companies can go 20, 30 or even 40 years without a space of their own. Morgan, the producing artistic director of the Moorestown Theater Company and self-described eternal optimist, said he’s hopeful that MTC may find a space to call its own by the 20-year mark.

In the meantime, the 17-year-old theater company has recently undergone a move – relocating from its Main Street location where it rented space at the First Baptist Church of Moorestown to a new location just across Route 38 at 820 East Gate Drive in Mount Laurel. He said the space isn’t permanent by any means, and so in the meantime, they’ll continue to look for both their next temporary and permanent locations.

In early summer, the church informed MTC that it had growing needs that required more space, and so, by the end of August, MTC needed to relocate. Morgan said the timing wasn’t ideal given that summer is their busiest time of year as they put on 36 performances of six different shows. But by the last day of their summer camp sessions, they’d moved the majority of their mirrors, chairs and other things into storage – uncertain where their next space might be.

Serendipitously, on that last day, Morgan heard of a space in Mount Laurel that might be available. The family swung by on their way down to South Carolina for vacation, and when they returned, Morgan met with the landlord. By early September, they were moving in.

Morgan said given their nonprofit status, the landlord has given them a generous break on rent, but they are operating in the space with the understanding that if he finds a tenant willing to pay full price, they’ll have a month’s notice before they have to relocate.

In the meantime, the space suits their needs nicely, Morgan said. The church was a high-trafficked space, and so, they’d have to put their equipment away after each rehearsal or cancel if the church needed the space for a wedding or funeral.

At the Mount Laurel space, they can leave their equipment out, and Morgan said he’s looking into offering classes during the day – something he was never able to do at the church. He said if someone has a group that wants to do a lunchtime exercise or dance class, he’s got the space, and he’ll find the instructor. He’s also considering Friday night courses for adults such as adult tap or adult musical theater.

However, Morgan said they’re always looking for a more permanent space. He said each year the cost of renting stages from schools and other facilities rises, so he’d love to have a home of their own.

“The ultimate holy grail would be a place to rehearse in and perform in and just do everything under one roof,” Morgan said.

He has a place in Moorestown he’d love to buy and renovate – though he won’t say where, but at an estimated cost of around $1.2 million, the nonprofit can’t quite swing the space just yet. He said there aren’t very many buildings in South Jersey sitting vacant with chairs and a stage, so any space they do find, they’d have to run a capital campaign to renovate it to fit their needs.

Morgan said he wants any permanent place to be in Moorestown, and he knows there are people in Moorestown who might like to see a permanent theater location juxtaposed among the other businesses in town. He said they’d happily accept donations from anyone who wants to help see that dream realized.

In the meantime, MTC is working on its 11th Annual “Extrava-Gala,” the company’s yearly fundraising event. The night’s festivities will take place at the Camden County Boathouse on Friday, Nov. 1 at 7 p.m. The cost of attendance is $125, and the night’s festivities will include food, performances, raffles, gaming tables and more. He said they’re hoping to hit at least 200 attendees.

Morgan said this year’s fundraiser is especially important given the location limbo, the rising cost of stage rentals and other financial constraints the company faces.

“In this day and age, it’s more important than ever that that event succeeds,” Morgan said.

To learn more about the Moorestown Theater Company or to purchase tickets to the Extra-Gala, visit http://moorestowntheatercompany.org.

Parks & Rec. encourages locals to explore their own town