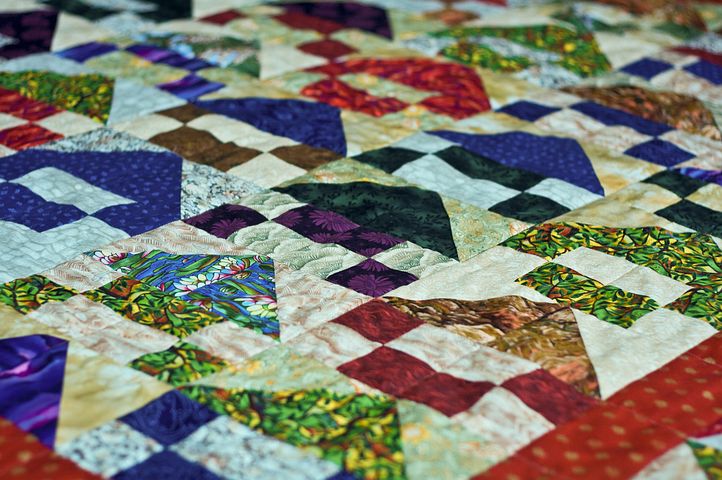 Laura Hartsel, the founder of “A Spot of Teal,” told the story of how her organization found its name. The story goes like this: Hartsel’s sister, an ovarian cancer survivor, was invited to a cancer survivors benefit. At the benefit, she was looking for “a spot of teal,” the color of ovarian cancer, amid a sea of pink for breast cancer. While she eventually found another survivor sporting the same color, she felt discouraged afterward.

Enter Laura, who decided to have a quilt show to raise awareness for ovarian cancer. The rest, as they say, is history.

The fourth annual quilt show is scheduled for Sept. 20 from noon to 5 p.m. and Sept. 21 from 10 a.m. to 3 p.m. at the Monroe Township Public Library. Interested attendees can reserve a seat for tea at noon on the 21st at aspotofteal.org. The show, including the tea, is free to attend. Williamstown’s female a cappella group Shades of Harmony will perform on Saturday as well.

In Laura’s opinion, quilting parallels to life in many ways.

“You take 10 beautiful fabrics and cut them into different pieces, have them spread out ready to be sewn together and you put them back and make a beautiful work of art,” she said.

The pieces symbolize aspects of life. Laura said sometimes there’s a car accident, cancer or divorce while you’re putting pieces together. Sometimes it won’t make sense, but as you work through it you’re left with something beautiful on the other side.

“It’s a wonderful coping skill,” she added. “Everything you’re doing is making something better. It’s so therapeutic and so rewarding.”

There are still spots open for those who wish to display their quilts at the show – visit spotofteal.org to register.

The show will feature beautiful quilts for attendees to marvel at. The purpose of the show is to bring ovarian cancer awareness into the spotlight.

“It’s a way for us to share how to be diagnosed early for ovarian cancer,” Laura said. “If diagnosed early, you have a 93 percent chance of survival. Something that can have such a wonderful, positive success rate is ignored.”

Symptoms of ovarian cancer are abdominal bloating, indigestion, nausea, pressure in the pelvis or lower back, a more frequent need to urinate, constipation and changes in bowel movements. The symptoms, as common as they are, generally go unnoticed and won’t be treated for ovarian cancer until it’s too late. Laura added a trip to an OBGYN or an oncologist is best because a gastroenterologist won’t be able to check for cancer.

At the show, Laura will be dispersing information and speaking to anyone about going to the right place.

“The symptoms aren’t silent, we just ignore them.” Laura said.

After the three prior shows, Laura said she has awarded $2,500 to ovarian cancer survivors. She said the usual award is around $500 per person. She acknowledged this isn’t a lot of money, but every little bit helps.

“It helps with things insurance doesn’t cover like bridge and co-pays. Things that happen in life like gas, prom, a dinner with your husband,” Laura said. “It lets them know people are interested in helping in some way.”

She didn’t mention a specific goal for fundraising at the fourth annual quilt show, she’s just looking to make an impact in anyway possible. The fundraising is done through suggested donations, similar to raffle tickets along with a silent auction.

For more information on the quilt show, visit aspotofteal.org.