There aren’t many soccer players in South Jersey who have the offensive prowess of Cinnaminson senior Emma Karch.

During her first two years, Karch was one of the top offensive weapons for the Pirates. She had an immediate impact her freshman year in 2016, scoring 14 goals and helping the Pirates reach the South Jersey Group 2 final, which they lost to Haddonfield. The next year, Karch and the team took another step forward. Karch scoring 19 goals and again helped Cinnaminson to the sectional final against Haddonfield. This time, the Pirates won, with Karch scoring one goal and assisting on another in the victory.

There also aren’t many soccer players who have had to overcome the injuries Karch has had to over the past few years. Karch’s first major injury was a broken left leg she suffered shortly after her freshman season. The second was when Karch tore her left ACL during a game with her club team in May of 2018. The injury wiped out her junior season and kept her off the field for more than a year.

“When I tore my ACL, I was really frustrated,” Karch said. “I was going to give up. But then I thought, when I broke my leg, I came back even stronger. So I just kept thinking of that.”

Karch didn’t give up. She’s now back on the field and poised to be one of South Jersey’s top offensive weapons once again. In her first competitive game in more than a year on Sept. 3 against Cherry Hill West, Karch scored to help the Pirates to a 2-1 win. She would score again four days later in a victory at Kingsway.

Great way to start the season with home openner win 2-1 over a very good CH West team. @sarahpassey with a Goal; @Emmakarch1 with a Goal and an assist. Well done ladies!

“That felt really good because I haven’t obviously scored in a while or even played,” Karch said of her goal in the Cherry Hill West game. “It felt good to put it in the back of the net because I had other opportunities throughout the game.”

“It was huge,” said Brandon Bond, Cinnaminson’s second-year head coach. “Getting the first game jitters out of the way, coming back from that injury, picking up where she left off from a year ago and being able to score, it was huge for her confidence and the team’s confidence.”

A lot has changed with Cinnaminson since Karch last took the field for the Pirates as a sophomore. Most of the core from Cinnaminson’s 2017 championship team has graduated. The Pirates also changed head coaches last year, with Bond taking over in 2018. The coaching change brought a change in formation for Cinnaminson, meaning the adjustments Karch had to make this preseason went beyond just getting back into game shape.

Despite the many changes on the roster and with the team’s formation, Bond believes Karch looked strong in the season’s first week.

“She’s had a lot of success,” he said. “Four games, two goals and she’s gotten a lot of opportunities. I think the supporting cast has been very strong with supporting her in coming back and pushing her to be the best she can be.”

Physically, Karch said she’s currently playing at about 75 percent strength. In addition to missing her junior season with Cinnaminson, Karch was not cleared to play with her club team in 2019, making the Cherry Hill West game her first time back on the field in a competitive match in more than 15 months.

Playing at less than 100 percent is nothing new for Karch, however. During her 19-goal sophomore season, Karch said she played nearly the entire year at about 75 percent as she recovered from her broken leg.

“It was hard,” Karch said of the first practice in August. “You have to be in shape. I lost what I had and I had to train a lot more. You have to re-teach yourself everything you’ve had before.”

“You can tell she was very hungry to get back on the field after all that time off,” Bond said. “She’s been working (hard), getting herself physically in shape and learning a new system and how to play to her strengths.”

The return of Karch to the lineup could be the boost Cinnaminson needs to get back on top. Even without Karch in 2018, the Pirates returned to the South Jersey Group 2 finals, where they fell to top-seeded Delsea in penalty kicks.

After all of the physical therapy and hard work she’s had to go through in her high school career, Karch wants nothing more than to finish her high school career back on top. She’s determined to play just as well in her senior season as she did in 2016 and 2017. And she’s hopeful for one more thing. 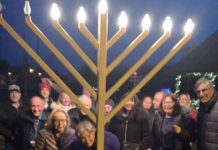