The Falcons played in their first-ever varsity match last Wednesday against Northern Burlington, while Timber Creek will debut against rival Winslow Twp. on Monday.

The Falcons may have lost the point, but it didn’t matter. They made history simply by competing in the program’s first-ever varsity match.

Burlington Township is one of at least five high schools in South Jersey fielding girls volleyball teams for the first time in 2019. Many of these teams made their debuts last week, including the Falcons, who opened their first season at home against Northern Burlington.

“They were super excited,” Burlington Township head coach Gemma Winkler said. “I thought they were going to be nervous. But they were excited, they were ready to play. … They were just into it, they love the sport and they finally get to play it at the high school level.”

Every time Burlington Township touched the ball last Wednesday, it added another page to the history books. After dropping the first six points of the match, Burlington Township finally won its first point when sophomore Taylor Fitzpatrick made a solid hit that Northern Burlington failed to return. The celebration after winning the point was almost as if the team had won a match point in the playoffs.

“We were just so excited,” senior Nancy Huynh said.

“When you keep the play alive, you really worked hard for that point,” senior Ariana Nunez added. “It’s a little bit of confidence booster. We came together as a team. We passed, we set, we hit, we got the point.”

Nunez, Huynh and Kaitlyn Walker are the most experienced players on Burlington Township. The three seniors all played volleyball at the club level and were some of the community members who advocated to the school board to add girls volleyball. Getting to play in their first varsity match was a dream come true.

“I remember us as freshmen trying to get a team and we didn’t have one,” Walker said.
“Now as seniors, seeing (the freshman class) get to play and knowing they’ll get four years of it is awesome to see.”

Most of the remainder of Burlington Township’s roster consists of players with no previous volleyball experience. The three seniors were named captains and tasked with helping Winkler teach the basic fundamentals of the sport.

“We just want to motivate the girls to do the best they can.,” Walker said. “When their heads are down, we pick them up and reassure them that it’s OK to make mistakes. It’s not the end of the world, it’s just volleyball.”

The Falcons’ opponent on day one, Northern Burlington, was an experienced team that had finished with a winning record the past two seasons. It wasn’t a surprise when Burlington Township lost both games to fall in its first match, However, the score didn’t matter to the Falcons. Just getting on the court and competing in a varsity match was all that mattered.

“Playing in a game, it’s a little bit more pressure, especially because it’s home and we want to play well on our home court,” Nunez said. “But we made history, the first game ever for the school’s first volleyball team ever.”

Burlington Township is hoping to achieve another first soon: its first win.

Just as the Falcons made their debut on Wednesday, excitement was running high 25 miles away as Timber Creek girls volleyball prepared for its first-ever match. The Chargers got some extra preparation time for their debut as they did not have a match on their schedule in the season’s first week. Timber Creek was scheduled to open its season at Winslow Township on Sept. 9.

There may not have been a more lively preseason camp than the one Timber Creek head coach Chuck Newsom had this summer. After being a football coach for three decades, Newsom initially decided to step down from the football program to spend more time with his grandchildren. Shortly afterward, the girls volleyball head coach position opened up. Newsom jumped at the opportunity.

“I started going to clinics, volleyball classes,” Newsom said. “I got track girls to come out and basketball players.”

The enthusiasm for Timber Creek’s newest sports team was apparent from day one. Sixty-seven players tried out for the team this summer. Nearly all of them were playing competitive volleyball for the first time.

“We’re out her to have fun, learn the basic rules and fundamentals, along with sportsmanship,” Newsom said. “This is a classy sport with a lot of quality people.” 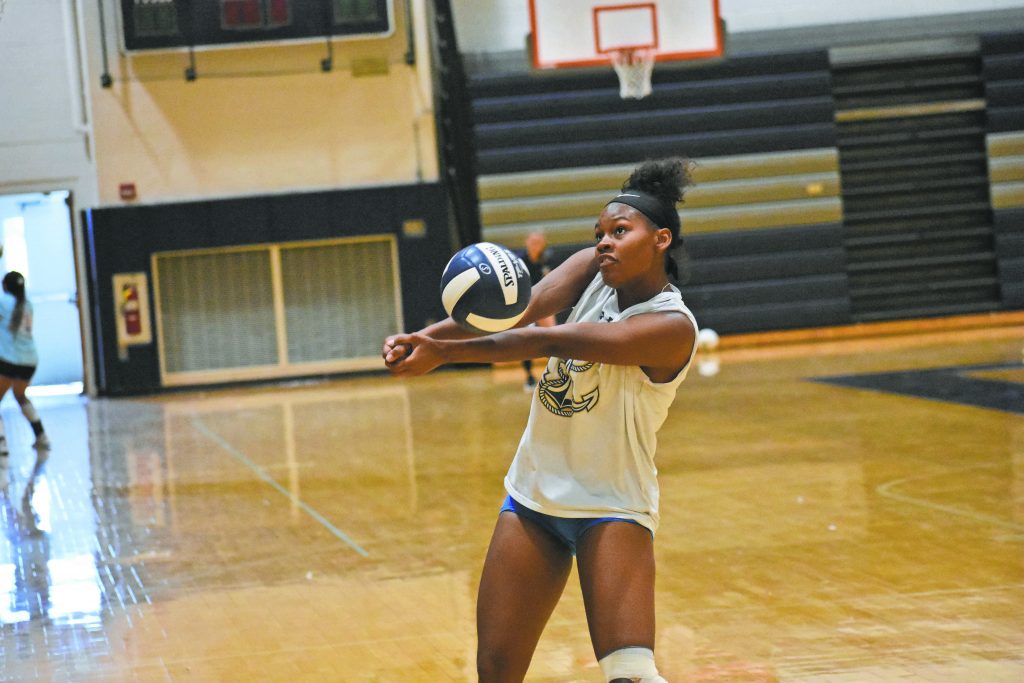 The two players on Timber Creek’s roster with club experience are serving as the program’s first varsity captains. Junior Mhylah Eiserman and senior Keia McElroy both had wanted Timber Creek to add volleyball for the past couple of years and are thrilled to finally be able to represent their school this season.

“I started a couple years ago playing volleyball,” McElroy said. “So it was really exciting when we actually got a team that was going to compete with the other schools.”

Eiserman and McElroy are almost like player-coaches, teaching many of the new players about the rules, positioning, how to rotate and basic skills.

“It’s our first year, so a lot of people haven’t played before,” Eiserman said.

Girls volleyball was added at all three Black Horse Pike Regional High School District schools this fall, with Highland and Triton also fielding teams for the first time. The three district high schools scrimmaged twice in the preseason, giving each other competitive matches early in the season. The three teams will also play each other twice in the regular season.

“We shared the gym with Highland all summer,” Newsom said. “We have a good relationship with them and the Triton coaches. We’re all starting together. It’s like a family unit.”

The inaugural first season is more about building a foundation than wins and losses for both Burlington Township and Timber Creek. Timber Creek’s roster features a lot of athleticism, with many players who compete in other sports such as basketball and track. While that athleticism could help the Chargers compete in their first season, Newsom said this season is about mastering the basic skills in the sport.

“It’s a good group of kids, good athletes who are really embracing the sport,” Newsom said. “We’re having fun.”

Winkler plans to set goals for each match for Burlington Township rather than focus on the team’s record. She also believes mastering the basics of the sport will set her team up for success years down the road.

“As long as they are improving on their skills, as long as they’re building on what they’re doing and getting more consistent, I’m happy with it,” Winkler said.