One 6-year-old’s ambitious goal of gathering 1,000 backpacks in the fourth year of his collection drive was shattered thanks to the help of his community.

Collecting backpacks for kids in need comes naturally to Austin LeConey as he’s been doing it since 2016, but to hit his goal of 2,202 was mind-blowing to him and his family.

“All of these backpacks we’re looking at are really the fruits of other people’s kindness,” said mom Meredith. “He is the vessel to help put that in the hands of other children who need it most.”

Austin said his favorite part in doing the backpack drive was reaching past his goal of 1,000 backpacks. In previous years, he collected 711, 67 and 24 school bags for the Unforgotten Haven in Blackwood.

“We knew he was going to bring in 1,000 because he always meets his goal,” said Michele Gambone, founder of the Unforgotten Haven. “People want to help him, why wouldn’t you want to help him?”

Meredith added the backpacks, which often came with a note inside, were sent by people from all over the country, thanks to the “Austin the Backpack Buddy” Facebook page and its Amazon Smile Wishlist.

Seeing the community, Meredith said, rally behind the backpack drive and kids in need “has been the most inspiring thing.” She added that each of the backpacks collected represents the love that people have to give to another child.

Gambone said LeConey’s drive helped the nonprofit satisfy two-thirds of its list of children who are in need of backpacks. She added many times the list consists of kids who are on free or reduce breakfast and lunch programs because they’re likely the ones who need backpacks the most.

“A backpack is the most expensive part on a list for these parents that are struggling and need it,” Gambone said.

Meredith added her son was able to see the fruit of his labor last year when they visited a school in Camden as the backpacks were being handed out, and he saw kids picking out the backpacks they wanted to don for the school year.

With the Backpack Buddy being 6 years old, Gambone said it’s prime time for children to get into volunteerism and understand how much they can help out another person. LeConey, she added, was also raised with compassion from his parents, which helps him stick to his goal and support children in need.

“I know he’s going to do more next year, he’ll probably need two trucks,” she added. “We love his family, and they’re compassionate.”

The younger LeConey jokingly said his next goal would be 8 million backpacks, then scaled it back to “filling the brown truck.” Meredith said the family will work to figure out the next goal, but they’re thrilled with the response from this year’s drive.

“It’s wonderful that Austin’s doing this and is engaged, but what’s really incredible is the way the community’s coming together and the way people are coming together to work toward a common goal to help children in need,” Meredith said.

To donate supplies to the Unforgotten Haven to help fill the backpacks, visit www.TheUnforgottenHaven.org. To purchase backpacks from the LeConey’s wishlist, visit www.Facebook.com/AustinTheBackpackBuddy. 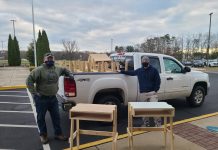