Fight for your right to enjoy summer without mosquito bites 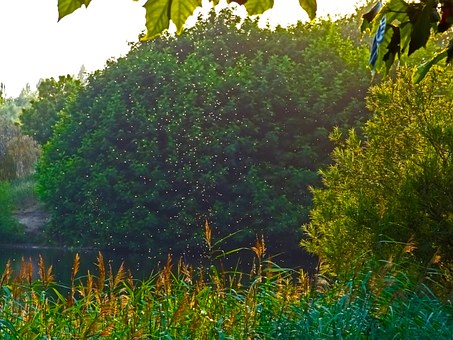 Mosquitoes – along with poison ivy – are two banes of existence in South Jersey for those who wish to explore the outdoors and fully embrace the warm weather of the summer season.

According to Camden County Mosquito Control, there are approximately 63 species of mosquitoes found throughout the Garden State.

Although not all of those can be found this time of year in the county, and some that are found here do not bite, it’s still no source of comfort for hundreds of thousands of residents who eventually deal with the incessant buzzing and itchy red bumps characteristic of a mosquito attack.

The most common species in the area is the Asian tiger mosquito, recognized by its size and striped colors.

Lauren Segreto from the CCMC stated that spraying in the county occurs generally in the summer season, from Memorial Day through September. However, this year, which has seen 21 spraying episodes as of Aug. 1, began in June and is not expected to conclude until either late September or possibly into early October.

“It’s usually done in the early morning hours, between 2 a.m. and 6 a.m., just before most folks would be getting up for work,” Segreto added. We do it at least twice per week depending on the need and maybe more, based on the number of residential complaints in a particular area.”

Additional factors in the number of spraying incidences are increases in temperature and humidity, along with the amount of standing water left over from rain events.

While most mosquito bites are merely inconvenient, in certain cases, they can be harmful to both humans and animals.

“While we really don’t have malaria in the United States, we have had incidents of West Nile virus in humans, as well as Eastern Equine Encephalitis in horses, Segreto said. “Also, mosquitoes are the main source of transferring heartworms, and that’s why dog owners should be giving them those edible heartworm pills around this time.”

As far as protecting one’s family or property, Segreto suggests repellant sprays or creams for personal use. She noted that anything sprayed on property or land, for instance by a private contractor or a homeowner, or use of Citronella candles, simply kills adult mosquitoes but does nothing to curb the growth and breeding of mosquito larvae.

Regardless, mosquitoes typically live, breed and die within 100 feet from the water in which they were originally hatched.

Though a perennial nuisance, here are some additional tips for county residents to ward off the  prickly menace so they don’t have to call out a whole “swat team” this summer.

Camden County residents can call (856) 566-2945, or visit: http://www.camdencounty.com/service/mosquito-commission/ to report any mosquito-related issues.