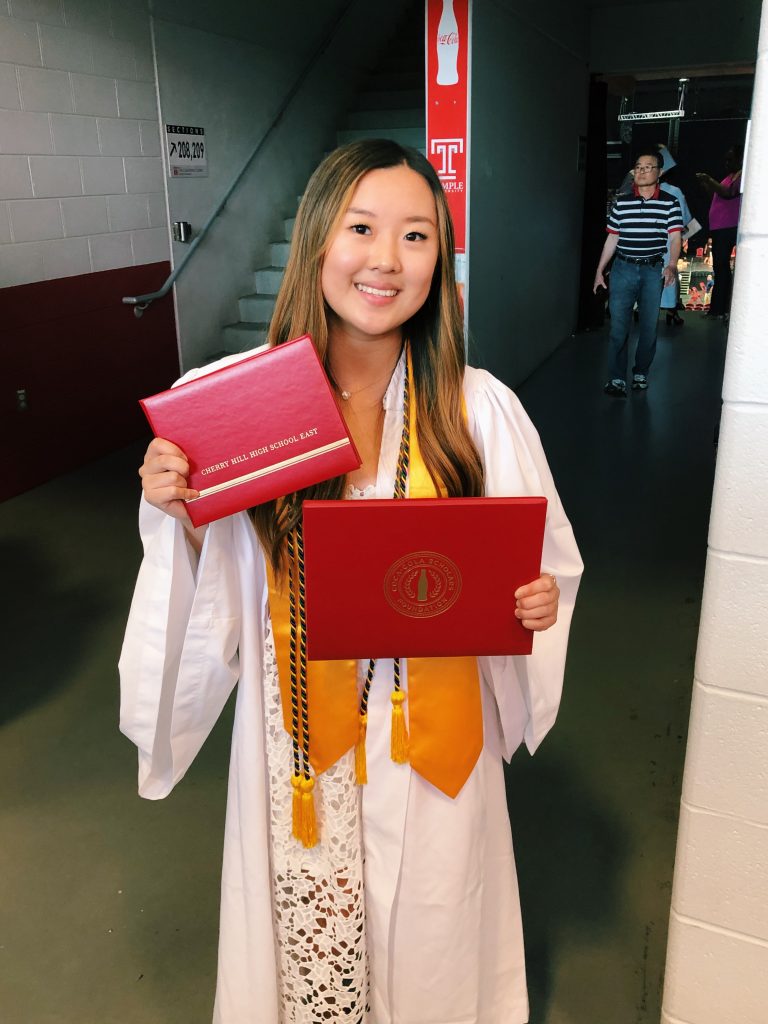 Vivian Lu, a recent Cherry Hill High School East graduate, has been recognized as one of the country’s most outstanding high school leaders by the Coca-Cola Scholars Foundation and has been awarded a $20,000 college scholarship. She is one of 150 selected from 95,715 initial applicants from across the country to receive this scholarship.

As a member of the 31st class of Coca-Cola Scholars, Lu not only exemplifies superior leadership, service and academics – she is a change agent, positively affecting others in her community. She created a magazine devoted to amplifying underrepresented voices in the literary community, volunteered at a neuroplasticity laboratory to study oxytocin cell expression at New York University Medical School last summer and teaches immigrant students English.

“In every action I take, I strive to extend empathy to others because I come from an immigrant family that has benefited greatly from the kindness of others,” Lu said. “Growing up in a household where English was never the primary language spoken, my entrepreneurial, leadership, and academic pursuits aspire to give a voice to those who do not have one.”

A joint effort of Coca-Cola bottlers across the United States and The Coca‑Cola Company, the Coca‑Cola Scholars Program is one of the largest corporate-sponsored, achievement-based scholarship programs of its kind. With the addition of the 2019 class, the Coca-Cola Scholars Foundation has provided more than 6,150 Coke Scholars nationwide with more than $69 million in scholarships during the course of 31 years. The 31st class of Scholars alone will collectively be awarded $3.1 million in scholarships.

“We believe that identifying these young leaders throughout the country and encouraging their passion for serving others not only empowers the students, but also lifts up those around them.” said Hopkins.

Lu will be attending Columbia University in the fall where she plans to major in financial economics and political science with a business concentration.

“This scholarship allows me to attend the university of my dreams, and move forward from high school with the knowledge and confidence that I have a family of Coca-Cola Scholars supporting my every endeavor,” Lu said. “Being a part of the Coca-Cola Scholars community has given me resounding strength to further my vision and pursue my goals with greater resilience and self-awareness.”

In addition to receiving college scholarships, Coca-Cola Scholars went to Atlanta April 4-7 for Scholars Weekend where they served as the guests of honor at a celebratory banquet, participated in a leadership development curriculum, and were welcomed into a vibrant and growing family of alumni that have become a powerful force for positive change in the world. Mayra Linares-Garcia, Vice President for Public Affairs and Communication at Liberty Coca-Cola Beverages – the local Coca-Cola bottler for New York City, New Jersey and Philadelphia – joined Lu and her peers in Atlanta.

“Liberty Coca-Cola is so proud of all the scholars from our territory, as they represent all of the remarkable young talent that we have in our communities,” said Linares-Garcia. “I enjoyed speaking with the scholars and learning about all of the exceptional things they have already accomplished. They are going to continue to make us proud, and I cannot wait to see how they change our world for the better.”