On July 6, a small tornado touched down along Gaither Drive in the township. It was the first confirmed tornado in Burlington County since 2004. 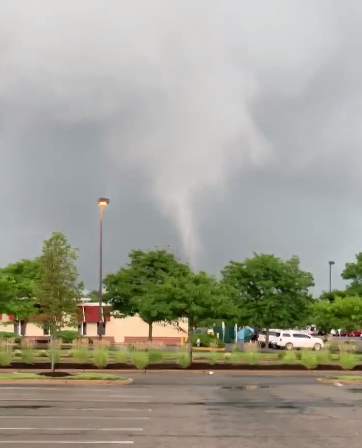 On July 6, some people in Mt. Laurel witnessed a weather event no one had seen in Burlington County in more than decade.

It was a rare sight at the Mt. Laurel Industrial Plaza located on Gaither Drive between Interstate 295 and the New Jersey Turnpike July 6 as a tornado briefly touched down and caused damage in the area. After a short investigation, the National Weather Service in Mt. Holly confirmed the event as an EF0 tornado on the Enhanced Fujita Scale. The twister was the first confirmed tornado to touch down in Burlington County since 2004, according to The Tornado History Project.

According to information from the National Weather Service, the tornado formed a little after 2 p.m. on July 6 along the 100 block of Gaither Drive. Patrolman Kyle Gardner, public information officer for the Mt. Laurel Police Department, said officers were originally called out to the site shortly after 2 p.m. after receiving a report of an overturned vehicle. Upon arriving on scene, emergency personnel saw the vehicle outside of Castle Windows, located at 109 Gaither Drive, and also smelled gas in the air. The natural gas at the site was shut off and PSE&G was called to the scene.

Just a couple hours after the tornado hit, Mt. Laurel Police released surveillance footage from a security camera at Castle Windows showing the tornado had caused the overturned vehicle to flip over. Gardner said there was no one in the vehicle at the time and no injuries were reported.

Today at approximately 2:00 pm, on the 100 block of Gaither Drive a possible tornado was reported! A parked vehicle flipped over and additional damage to a roof and air conditioning unit was confirmed. Most importantly no one was hurt. No residential areas are affected at this time. The National Weather Service is investigating.

The Mt. Laurel Fire Department also arrived to the scene and inspected the roof for several buildings along Gaither Drive. Fire officials discovered some roof damage and two air conditioning units that were flipped over.

Personnel are actively working at several incidents with damage in an isolated area of Mount Laurel on Gaither Drive from a reported tornado visible in this video. The National Weather Service-Mount Holly and NOAA were advised and provided information to investigate. #NOAA #skywarn

In its preliminary investigation, the National Weather Service described the twister as a landspout tornado. The maximum width was just five yards and it was estimated to be on the ground for about 0.07 miles.

The lack of rotation in the storm cell was also one of the reasons a tornado warning was not issued when the storm hit.

“These are very hard to detect,” Davis said. “We go off the information we have. Sometimes (tornadoes) happen very quickly.”

Davis said there are a number of actions people can take if they suddenly spot a tornado in their vicinity. If possible, anyone near a tornado should take shelter in the nearest sturdy structure. The safest place to stay during a tornado is a basement or interior room on the lowest floor of a building.

The tornado was reported to have touched down very close to both Interstate-295 and the New Jersey Turnpike. The industrial plaza where the tornado hit sits between the two major highways. Anyone driving a vehicle that spots a tornado should attempt to drive away from the twister and to the closest shelter. For those who can’t make it to a shelter, it is advisable to seek shelter in a low-lying area. Davis said motorists should also not stop at an underpass with a tornado in the area, noting dangerously high winds can funnel up underneath and create a very dangerous situation.