There were plenty of stars on the track this month in South Jersey. In the SJSW coverage area alone, more than 20 athletes can call themselves state champions this year after taking home first place medals in the Group State finals on May 31 and June 1.

In individual events, difference athletes were crowned state champions this year. Two athletes, Aliya Rae Garozzo of Paul VI and Tierra Hooker of Timber Creek, won state titles in multiple events. Garozzo won both the 100 and 400 hurdles in Non-Public A, while Hooker was the high jump and long jump state champion in Group 3. Three other athletes were champions in hurdle events. Sam Aviles of Palmyra won the 110 hurdles in Group 1, Naseem Smith of Deptford took the 110 hurdles in Group 3 and Meredith Updike of Cinnaminson was the 400 hurdles champion in Group 2.

Boys Track & Field: Luch Pizarro stands with his coaches after winning the Meet of Champions title with a throw of 60-11 in the Shot Put. HUGE?. #CherokeeProud pic.twitter.com/Xfq69gvKSb

Two athletes joined Hooker as champions in field events at states. James Lynch of Deptford took first place in the Group 3 boys pole vault. In the Group 4 shot put, Lucciano Pizarro of Cherokee came out on top. Pizarro went on to be the only SJSW-coverage area athlete to take a Meet of Champions title when he won the shot put on June 8.

Long distance runners starred in a few events at the Group finals. Cinnaminson’s Austin Gabay won the 1,600-meter run in Group 2, while Connor Melko took the 3,200-meter run in Non-Public A. In slightly shorter races, Shelby Whetstone of Lenape was the Group 4 800-meter champion and Zach Murray of Haddonfield won the Group 2 400-meter race.

Speaking of Haddonfield, the Bulldawgs had two relay teams come out on top in Group 2. On the boys side, Derek Gess, Andrew Gostovich, Greg Eisenhower and Ethan Spellmeyer won the Group 2 4×800-meter relay. For the girls, it was Lindsay Colflesh, Olivia Stoner, Payton Weiner and Allison Colflesh who won the Group 2 4×400-meter relay.

Another state championship team was on the opposite end of the spectrum. Winslow girls track won its seventh straight Group 3 team title, the longest streak among girls public school programs in state history. Leading the way for the Eagles was the 4×400-meter relay team of Rayven Rouse, Nicole Good, Janeya Hammond and Nylah Perry, who breezed to a first place finish in their event.

June 8 marked the official conclusion of the New Jersey high school sports season. For the June 19 and June 26 issues of South Jersey Sports Weekly, end of the year awards will be handed out to the top teams and players from the spring 2019 season. The following features will run in the upcoming weeks:

June 19 – Girls Team of the Year and Player of the Year stories for softball, boys tennis, boys golf, girls golf and boys volleyball

Check back with South Jersey Sports Weekly over the next couple of weeks to see which teams and athletes are being honored this season. 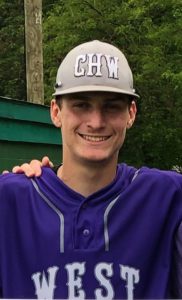 “Your best players play the best for you in the biggest games,” Cherry Hill West baseball head coach Dan McMaster said. That quote certainly rings true for Lions senior outfielder Scott Shaw. In the South Jersey Group 3 championship at Triton on May 31, Shaw made the highlight reels with an incredible catch in center field. Shaw made a jumping grab near the temporary outfield fence and hung on to the ball as he fell over the fence at the end of the play. The catch robbed the Mustangs of a two-run home run and helped the Lions maintain a 2-0 lead at the time.

“When I saw it hit off the bat, I knew I could catch it,” Shaw said. “I just didn’t know if I had enough room to catch it.”

Then, in the seventh inning with Cherry Hill West down, 3-2, Shaw bashed a two-run home run to give the Lions the lead back. Cherry Hill West went on to win, 6-3, for the program’s first sectional title since 1993.

“It was a huge deal,” Shaw said of winning a South Jersey title. “We lost last year in the sectional final. Being down one run in the last inning, we thought, we couldn’t lose it again. We wouldn’t have another shot at this.”

Quotable: “Scott has made that play or a similar type of play like that hundreds of times in our practices because of our assistant coach, Nick Caputi,” McMaster said about Shaw’s dramatic catch, noting Caputi works with the outfielders on fielding every conceivable play in the outfield. “For him to go over a temporary fence and make that type of play is extraordinary. But he has tracked balls and made plays like that throughout his career.”

“When he came to us, he was a shortstop,” McMaster added about Shaw, a four-year starter for Cherry Hill West who will play baseball at Rider University next year. “We had a lot of talented infielders in the program. Scott willingly moved to the outfielder. Because of Nick Caputi and Scotty’s work ethic, he became a really good outfielder. It paid off for him. It really paid off for him big picture-wise.”