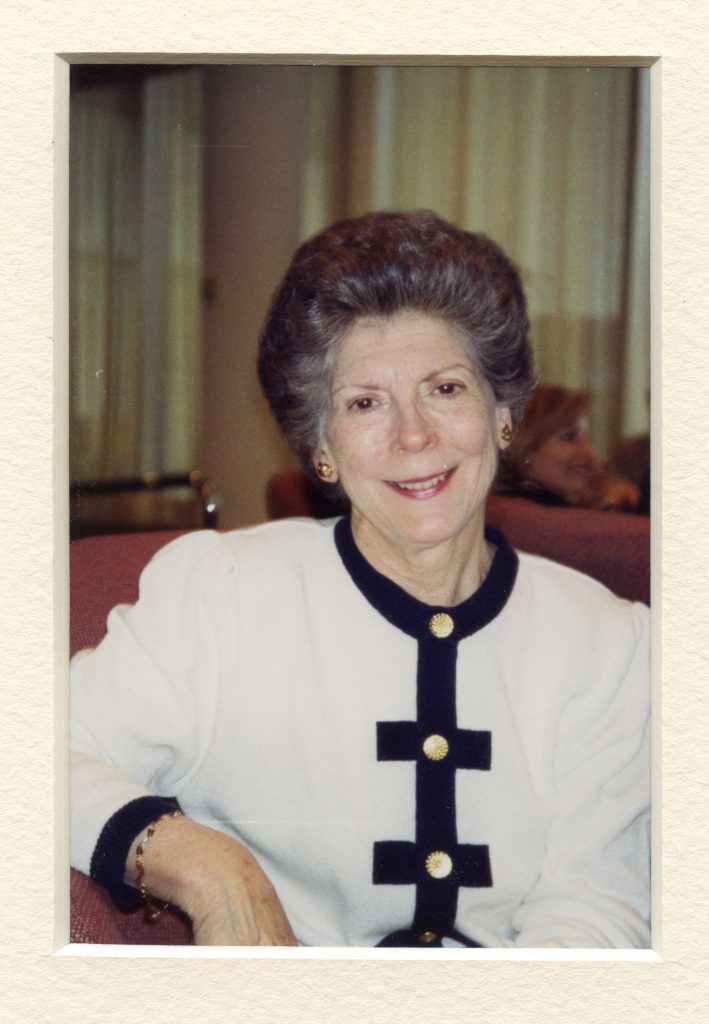 Gladys Palmer Bewley O’Brien, former director of the Haddonfield Public Library, longtime resident of Haddonfield, and, since 2000, a resident of Medford Leas in Medford, N.J., died on June 2 from complications of Alzheimer’s Disease.

Mrs. O’Brien was born in 1923 in Bayonne, New Jersey, the daughter of Gladys Elizabeth Powers Palmer and Garner David Palmer. Her brother, David G. Palmer, predeceased her in 2013. She graduated from Barringer High School, Newark, N.J. in 1940, earning the Bamberger Medal for Scholarship. She studied Spanish, Portuguese and French as an undergraduate and received her bachelor’s degree from New Jersey College for Women (which later became Douglass College, Rutgers University) in 1944.

During her senior year at NJCW she married Philip B. Bewley, who predeceased her in 1981. After her graduation, they moved to Frostproof, Fla., where she taught Spanish. They had three children, Peter (Lee), Susan and Elizabeth (Stephen Brubaker), two grandsons, Peter, Jr. (Amy) and Stephen (Jennifer), and seven great grandsons, Colin, Liam, Matthew “Max”, Owen, Aiden, Carter and William, who all survive her. The family moved to Haddonfield in 1960 and she continued her studies long distance, earning her master’s in Library Service from Rutgers in 1963.

Mrs. O’Brien began working at the Haddonfield Public Library as the reference librarian while still in graduate school. She left for a short time in 1966 to work as a consultant for the Drexel Graduate School of Library Science, returned to the library shortly thereafter, and, in 1974, became the director, a position she held until her retirement in 1981.

In 1986, Mrs. O’Brien married Robert O’Brien, who was also a longtime Haddonfield resident. They were so fortunate to have each other during that last quarter century of their lives. Mr. O’Brien predeceased her in 2009. His three children, Sharon Kurtz (Joseph), Sheila Leech (David) and Dan O’Brien (Helene), his seven grandchildren, Julia Pezzella (Anthony), Joseph Kurtz III (Danielle), Jeffrey and Ryan (Margaret “Marmie”) Leech, and Tim, Tess and Bridget O’Brien, and his four great grandchildren, Dominic and Calvin Pezzella, Joseph Kurtz IV and Mackenzie Kurtz, also survive her.

A member of the Haddonfield United Methodist Church, Mrs. O’Brien became the church’s archivist in 1997, a position she held until she moved to Medford. Throughout her life, Mrs. O’Brien was deeply involved in professional, civic and cultural activities, usually as a leader. She was a member of the Associate Alumnae of Douglass College (and the Secretary for several years), League of Women Voters, Libraries Unlimited (and Chairman of the first By-Laws Committee), the Middle Atlantic Regional Library Federation (and a member of the Board of Directors), the American Library Association, the New Jersey Library Association (Secretary and member of the Board), the Camden Area Library Coordinating Council (member of the Steering Committee), New Jersey Task Force for Library Standards, New Jersey State Library Statistics Revision Committee, the Haddonfield Historical Society (Executive Board member), the Haddonfield Bicentennial Commission, the New Jersey League of Historical Societies (Trustee), the Haddon Fortnightly, the Elizabeth Haddon Chapter of the New Jersey State Questers (and Secretary), the New Jersey Committee for the Philadelphia Orchestra (where she chaired the Annual Giving Program for many years), Zonta International, the American Contract Bridge League (Junior Master) and the Parnassus Book Club (in which she held every office).

A memorial service will be held at 1 p.m. on Saturday, August 17 at the Haddonfield United Methodist Church, 29 Warwick Rd., Haddonfield. In lieu of flowers, the family is requesting that memorial donations be made to the Rutgers University Foundation in support of the Gladys Palmer Bewley O’Brien Memorial Endowed Fellowship.

Running with a purpose