Aliya Rae Garozzo may have picked up track fairly quickly – she only began running competitively two years ago – but perhaps that’s not surprising since she’s known for being quick.

The Sicklerville resident and Paul VI junior was the only South Jersey athlete in The Sun Newspaper coverage area (20 towns and two dozen high schools) to win multiple state titles during the group championships last weekend: Garozzo finished first in Non-Public A in both 100-meter and 400-meter hurdle events.

Garozzo’s time in the latter event was more than a second faster than she finished in any other race this year, and has her as the second seed heading into the Meet of Champions this weekend.

Garozzo, who is also a member of Paul VI’s dance team, already holds five school records. And she still has another high school year to earn more hardware at the state level.

“She’s been to Nationals ever since she came into the program, so getting on that stage and getting to be able to see, nationally, what she can do against anybody, once you come back it (feels) easy, like light work,” said Paul VI coach Priscilla Frederick. “We kind of preach that it doesn’t matter who you go up against, it can be your day any day. So, for her, it’s fun for her. It’s her junior year and she has more to give. … She gets more and more confident with each year.”

Both coaches’ eyes lit up when they talked about her competitiveness.

“Literally since her freshman year I don’t know anyone in the whole state that she’s come over the hurdle with evenly after that last hurdle where she’s lost it,” Fisher said. “She will beat anyone she’s a step or two within the last hurdle. I’ve seen her go up against the Winslow girls, the Union Catholic girls, time and time again and she wins, she wins, she wins.”

Garozzo, who is competing for a spot on the United States U-20 World Trials later this month, spoke to South Jersey Sports Weekly before the Meet of Champions.

South Jersey Sports Weekly: How do you explain peaking at the right time in the season, all about work ethic and preparation?

SJSW: When did you begin running seriously?

SJSW: Just decide on a whim?

Garozzo: My family pushed me, nothing really too serious, but just to try it.

SJSW: Do you have siblings?

Garozzo: An older brother and older sister. My brother (John) played baseball in high school, my sister (Renee) did cheerleading.

SJSW: I wrote about a Garozzo in ice hockey season …

SJSW: So you’re also a serious dancer. What do you like about it?

Garozzo: I’ve just been doing dance for forever. I like the different styles, how it’s expressive. It’s a really big deal at our school here, we have a big dance program.

SJSW: Can it help with track?

Garozzo: Yeah, definitely in being flexible and mobile. And I feel like, I don’t know, having rhythm, that helps in track.

SJSW: What’s the feeling like crossing the finish line in first place?

SJSW: Do you have any track role models?

Garozzo: I really like (Olympian and NJ native) Sydney McLaughlin.

SJSW: How about outside of track, anyone you consider role models?

Garozzo: I guess my parents (John and Joanette). My family loves this whole process, they’re very supportive of me and everything I do.

SJSW: If you could pick any other three girls in South Jersey to run with on a relay team, who would you pick?

SJSW: I like that, picking a teammate. Let’s stick with that topic: who would you consider your funniest teammate?

SJSW: How about smartest teammate?

Garozzo: Paul VI is very welcoming and supportive of everyone, every club and activity, very supportive of the arts programs. It’s just a really great school. Very friendly, a lot of nice people.

SJSW: If you win at the Meet of Champions and can have any song play as you go get your medal, what are you picking?

Garozzo: I just want it to be silent.

SJSW: Dramatic, more impactful, all eyes on you.

SJSW: Anything you’re marathoning on TV?

Garozzo: Not really. I like “Impractical Jokers.” I don’t really watch TV series.

SJSW: What’s your favorite thing to do when you’re not running or dancing?

Garozzo: Just relax. It’s good to relax when you have time off. 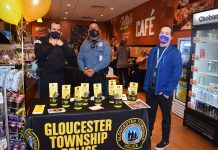 ShopRite hosts Coffee With a Cop in Gloucester Township