From baseball to softball to lacrosse, a number of athletes came up with big performances in sectional and state finals.

Haddonfield girls lacrosse was one of three lacrosse teams in South Jersey to win a state championship last weekend. The Bulldawgs won their second straight Group 2 title with an 18-7 victory over Madison on Saturday. What makes this year’s title different than last is Haddonfield winning without two of their best players, McKenzie Blake and Elise Fiannaca. Both players suffered season-ending knee injuries in the same game against Seneca in late April.

Rather than bowing out after the injuries, Haddonfield stepped up their game. Led by a senior-heavy lineup, the Bulldawgs bounced back from a rough first week of May to win 10 consecutive games heading into tonight’s Tournament of Champions semifinal against Oak Knoll.

“Once we knew a couple people were hurt, we all had to step up and almost have a new role,” senior Gabi Connor said. “A lot of seniors had to step up and even the underclassmen who weren’t playing much stepped up and played really well.”

You can read more about Haddonfield’s late season run here and in today’s issue of South Jersey Sports Weekly.

Moorestown boys and girls lacrosse both brought home state championships last weekend. After their state championship game was originally postponed from Wednesday, Moorestown boys lacrosse won the Group 3 state title on Friday by defeating Chatham High School, 9-6. Connor McDonough scored three goals to lead the Quakers, who were the lone South Jersey team to win both a sectional and state title this season. Moorestown’s season ended on Monday with a 13-9 loss to Montgomery in the Tournament of Champions. You can read more about Moorestown’s outstanding season in the June 12 edition of South Jersey Sports Weekly.

Moorestown girls lacrosse overcame a slow start in their Group 3 state final on Saturday and edged out Mendham, 9-8, to win the program’s second straight state title. The Quakers got three goals each from Ashley Nutt and Rylee Brown in the win. Moorestown will take on Ridgewood in the Tournament of Champions semifinals tomorrow. The Quakers will look for revenge after falling to Ridgewood, 12-8, in late April.

All for a Group 3 Public School in a Group 4 Conference…#TraditionNeverGraduates pic.twitter.com/Aei0vmEj7X

Cherry Hill West baseball made history on Friday with its first sectional title in 26 years. The Lions came from behind to defeated Triton, 6-3, in the South Jersey Group 3 championship. Scott Shaw was a big part of the Lions’ win, robbing a home run in the third inning and then hitting a home run in the seventh inning to lead Cherry Hill West to a come-from-behind win. Cherry Hill West’s playoff run ended on Monday with a 4-3 loss to Wall in the Group 3 state semifinals. You can read more about Shaw’s clutch performance in next week’s South Jersey Sports Weekly.

Eastern baseball will try to win its second state title on Saturday when they take on Ridgewood in the Group 4 state championship game. The Vikings won the South Jersey Group 4 title, 7-2, over Cherry Hill East. Eastern then edged Manalapan, 1-0, on Monday with a pair of suicide squeeze bunts being the difference in the game. Saturday’s Group 4 state final is scheduled for 7 p.m. at Veterans Park in Hamilton. You can read more about the Vikings in South Jersey Sports Weekly next week.

SOUTH JERSEY CHAMPIONS! #king Solometo threw 5 innings of shutout ball. The offense was led by Paxia, Lesch, and Cannon. The Rams look to claim the title for the THIRD year in a row next Wednesday at 7PM. #TUSSTHEPROCESS pic.twitter.com/uJPn94mRDp

Gloucester Catholic was dominant en route to winning the South Jersey Non-Public Group B title last week. The Rams won all three of their playoff games by 10 or more runs. In the sectional final against St. Mary, Anthony Solometo threw a three-hit shutout with 11 strikeouts as the Rams won, 11-0, in five innings. Gloucester Catholic will face off against St. Mary in the Non-Public B state finals. The game, originally scheduled for Wednesday, has been postponed to Thursday due to expected inclement weather tonight. South Jersey Sports Weekly will have coverage of tomorrow night’s game in its June 12 issue. 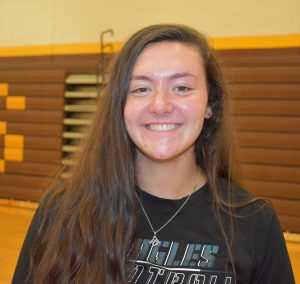 The Bears headed into the final week of the softball season as hot as any team in the state, taking a nine-game winning streak (and wins in 12 of their previous 13 games) into a state semifinal match with Bordentown last Friday. Thanks in part to the contributions of junior pitcher Lindsey Cramer, the Bears knocked off host Audubon in the South Jersey Group 2 championship game to collect the program’s first sectional championship since 1995. Kramer allowed just one run while striking out 24 batters in back-to-back wins over Haddon Heights and Audubon en route to a sectional championship.

Quotable: “It was amazing, we knew how tough of a team Audubon was after watching them (in the previous round) against Cinnaminson. We walked about our game plan, staying aggressive and focused, and we were able to do that,” Delran coach Danielle Worman said. “I think (Lindsey) has  really been hitting her spots. She’s been working ahead, which has helped tremendously. And he’s stayed mentally tough in tough situations. If there’s a runner on base and less than two outs, she’s been finding a way to get back to the dugout. She has a lot of focus and commitment to working hard and getting better every game. That’s really been key for her.”

“I just try to focus on every batter and try to pitch pitches they can’t hit, working on the inside and the outside of the plate,” Cramer said. “(The sectional championship) was really exciting for us. No one really expects Delran softball to be that good, so us accomplishing this was a really good feeling.”