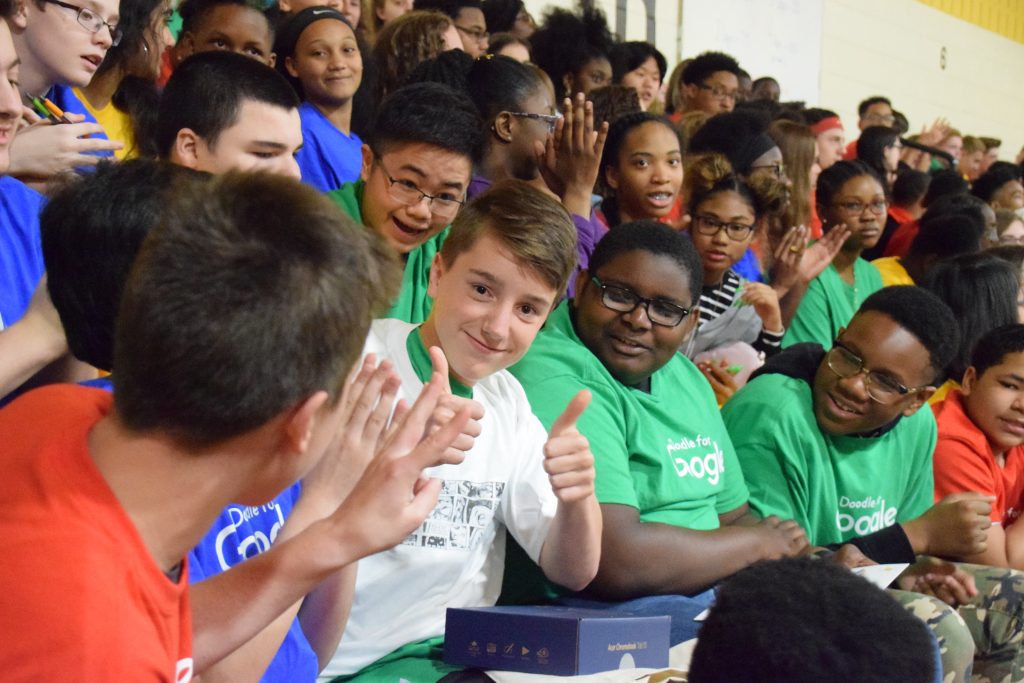 Jeremy Henskens, a talented cartoonist and eighth-grade student at Burlington Township Middle School at Springside, has earned a shot at having his artwork displayed for the millions of daily visitors to Google’s homepage as the state winner of the 11th annual Doodle 4 Google art contest.

The contest is open to kindergarten through twelfth-grade students throughout the United States and challenges them to redesign the famous Google logo. This year’s theme, “When I grow up, I hope…” prompted Jeremy to design a comic-panel style piece that represented his future hope to become a professional cartoonist.

Jeremy is one of just 53 state and territory winners for the contest and is now in the running to be one of five national finalists. These final five will be decided by public vote, open now at www.google.com/doodle4google/vote.html.

As is customary with Google’s homepage designs, Jeremy’s artwork incorporated the Google lettering in creative ways. 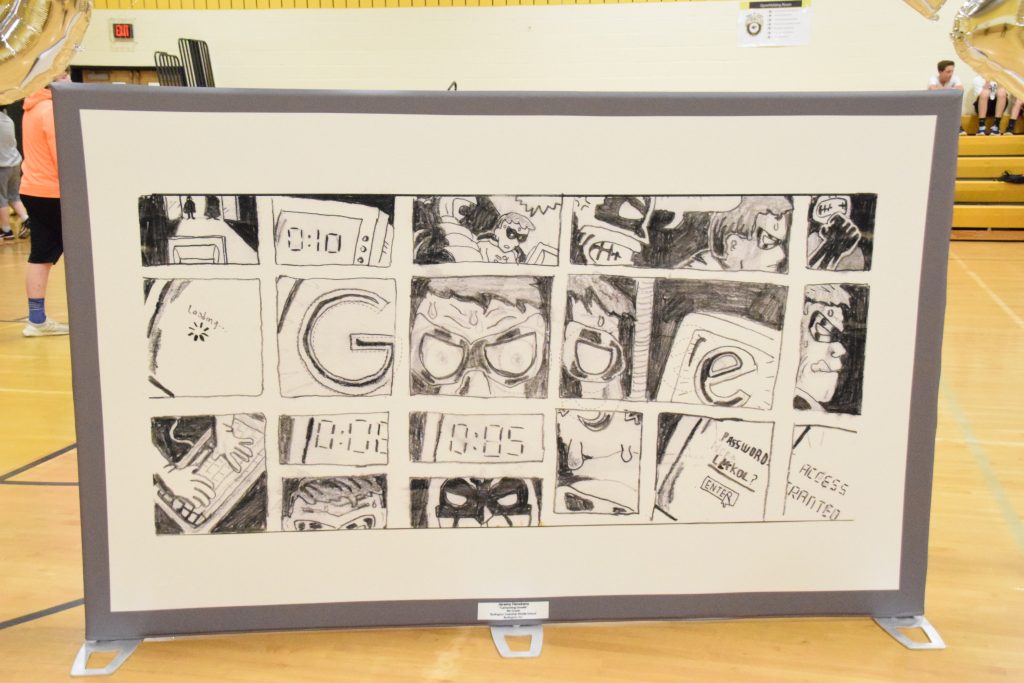 On Thursday, May 31, representatives from Google visited the middle school to hold a surprise assembly announcing Jeremy as the winner for New Jersey.

“I was shocked because that’s a lot of people I just passed. It was really unexpected. I kind of did it just to do it, I didn’t actually think I would win.”

This unexpected win came at a time when his family was in desperate need of some good news. On Friday, May 3, Jeremy’s father Tom passed away. The very next day, Kristen Hoffman, Jeremy’s mother, received a call from California.

When she picked up the phone, Hoffman believed the call to be coming from her brother-in-law who lives in California, but was surprised to instead be greeted with a message from Google headquarters informing them Jeremy’s artwork had been selected.

“It was a very difficult time and it was some positive news,” said Hoffman. “My husband was very artistic and it was kind of like his spirit was there. I don’t know how else to say it but it was something really positive that came at a great time. It was just what we needed at the moment.”

According to their mother, both Jeremy and his identical twin brother Kyle inherited their father’s artistic talent, and Tom was always very proud of his sons’ artwork.

“They love art, they have a natural talent and do amazing things. It’s nice that they can do something they really love and somebody else, not just their mom, says they are good at it,” said Hoffman.

Jeremy’s artwork was entered into the contest by his school art teacher, Joe Bliss, who got some of his students involved during one of his art exploratory classes.

“I don’t think I’ve ever had a more talented student come through the building, and his brother is equally talented. The two of them both work from their imaginations. They can work representationally, they can work with sculpture and ceramics, they are truly gifted students,” said Bliss.

Both brothers’ gifts, according to Bliss, are matched only by their work ethic he has witnessed in the classroom.

“They put in the time, effort and work kind of like a great athlete. You’re not just born a great athlete, it takes a lot of practice and discipline and they really work hard,” said Bliss.

Voting is now open to determine five national finalists who will be announced by Google in June.

One of these five works of art will be selected to be featured on the Google homepage for a day. The national winner will also take home a $30,000 college scholarship and his or her school will receive a $50,000 tech package toward the establishment or improvement of a computer lab or technology program.