At the 2018 LPGA Girls Golf Classic at Old York Country Club, Cherry Hill East’s Addi Mann stood out from the competition from the moment she walked up to the practice green.

Mann came to the event wearing pants with dozens of different-colored donuts on them. The outfit stood out among the typical red, blue, green and black uniforms worn by the other teams.

“Last year, I got on the cover of The Sun with the donut pants,” said Mann, who purchases her pants from Loudmouth Golf. “It’s my screensaver on my phone. I got so many texts about that from my friends saying, ‘Hey, you’re on the cover,’ and then other texts saying, ‘What the heck are you wearing?’”

“When I’m at school, I just wear dark clothes,” Mann later added with a laugh. “But when I’m out on the golf course, this is what I like to do and I’m going to embrace it.”

This year, Mann is standing out for more than just her outfit. She is emerging as one of the top female golfers in South Jersey. Mann has become a staple in the Cougars’ co-ed lineup and turned heads when she shot a 79 at the Camden County Championships on April 22. Her score was the best out of all of the golfers, male or female, in the competition.

“I had high expectations in that one, at least in the girls division,” Mann said of being the county champion. “My team did very well also, so the team won best team. But that round was just a really good round.”

Mann believes her game has improved a lot since last year, when she got her first taste of varsity action as a sophomore. Mann has shot 45 or lower in the majority of Cherry Hill East’s varsity matches this season, with her best score during match play a 41 against Lenape and Bishop Eustace on April 16. Mann’s April 16 score was the best for her team that afternoon.

Mann’s improvement can be attributed to a number of factors. She credits numerous coaches over the years, such as Andrew Pierson of Camden County Golf Academy and PGA professional Mike Mack, for improving various aspects of her game.

“I play every day as it is,” she said. “I’m out, sunrise to sunset. (Mack) was able to get my swing to where I wanted to be so I could shoot the numbers I wanted to shoot and get on the team.”

“My first two years, I felt like my game wasn’t there,” Mann added. “I was getting opportunities, I just wasn’t capitalizing on them. This year, one of my goals was to be a constant starter and earn my (varsity) letter.”

Mann loves putting in the work to improve because she loves golf. She tried out various sports when she was younger, but said golf just stuck out to her because she loved the people involved with the game.

Mann’s love for the game and its social aspects is apparent on the course. She remains relaxed when she is on the course and enjoys chatting with whomever she’s playing with during the round. Her unique sense of style with her Loudmouth Golf pants adds to her personality.

“I had to top (last year),” Mann said, showing off the red and black checkerboard pants she wore at last Monday’s LPGA Girls Golf Classic. “I got these this year to support the team.”

“I just like to have some fun out here and hang out,” Mann added.

Mann’s relaxed approach, combined with her passion for the sport, has helped her achieve two of the three goals she set for herself this season. The first goal was to be a constant starter for Cherry Hill East. Her second goal was to win a tournament. Mann now just has one goal left – qualifying for the NJSIAA state championships on May 21.

Mann showed she belonged among the top golfers in the region at last Monday’s Girls Golf Classic when she shot a 44, finishing 11th in a field of more than 100 competitors.

The event is one Mann looks forward to each year. With Cherry Hill East sporting a co-ed team instead of separate boys and girls teams, the tournament is one of the few times Mann participates in a girls event during the season.

“I’ve gotten to a point where I’m friendly with the guys and I see them a lot,” Mann said. “But this tournament is very chill. Everyone is on the same page. And there’s some girls who play on co-ed teams, so I’ll see them every once in a while. We get along, because we have the same experience.” 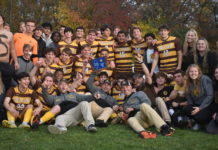 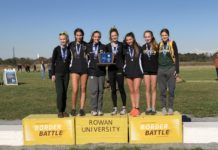