MFS senior recognized as ‘Journalist of the Year’ 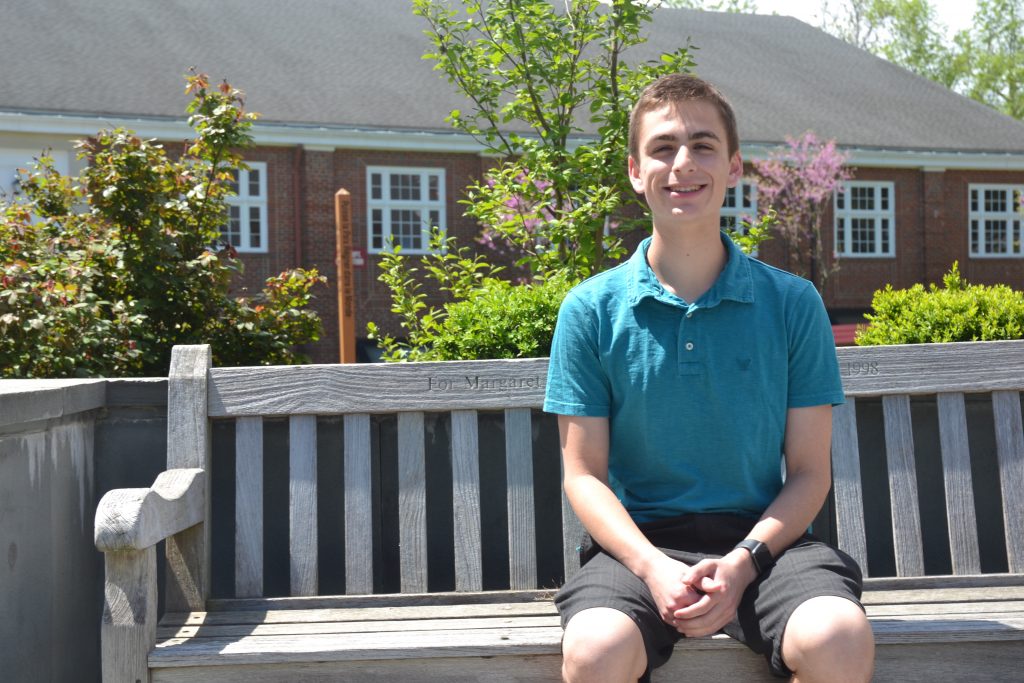 When Andrew Rowan was in kindergarten, he’d wake to the sounds of his parents watching the “Today” show. A natural early riser, the morning show quickly became a part of his daily routine. Even at such a young age, he was completely struck by the fact that the show’s interviews offered a glimpse into people’s lives.

Now a senior on the precipice of graduation, Rowan’s own journalism has gotten him noticed. The Garden State Scholastic Press Association recently named the Moorestown Friends School senior as “The New Jersey High School Journalist of the Year.”

Rowan said he’s not sure that there was definitive point when he chose journalism as his path, but his first official foray with news was in third grade during his religious classes at Congregation Beth El in Voorhees. The religious school offered a newspaper club that Rowan stuck with until he joined MFS’ Middle School Murmur.

In ninth grade, Rowan joined Wordsworth, MFS’ student-run news organization that includes print, digital, video and social media elements, and he rose to the role of editor-in-chief as a junior. In addition to his work at Wordsworth, Rowan also serves as editor-in-chief of MFS’ yearbook, “The Cupola,” and as an intern with MFS’ marketing and communications’ department.

Along the way, Rowan’s proudest moments were being part of a newsroom that paved new ground. He said the newsroom of 2019 tackled stories that staff of just four years ago weren’t covering. While previous staffers wrote about student accomplishment and student government happenings, Wordsworth’s staff wasn’t afraid to take a look at touchier subjects like the dress code, school security and cheating.

Wordsworth’s multimedia production also saw tremendous growth. The team took cues from Sports Center and created a “Spirit Center” daily broadcast covering the school’s spirit week happenings. He said coming in after school, writing scripts and turning them around for the next day gave him a taste of what high-pressure deadlines can feel like.

He said while implementing new ideas is great, inevitably the staff will completely turn over every four years. For that reason, they’ve made it a point to bring underclassmen in on all of their new projects to ensure continuity moving forward.

Rowan filled out 46 pages of materials to be considered for “Journalist of the Year.” He combed through his work to find pieces that met the four criteria: skilled and creative use of social media content; inquiring minds and investigative presence; courageous and responsible handling of sensitive issues; and variety of journalistic experience. As the “Journalist of the Year,” Rowan is also the recipient of the Bernard Kilgore Memorial Scholarship for $5,000.

When he learned he’d nabbed the honor, he was excited, of course, but in his eyes, the greater reward was just getting the work out there. He said having people tune in and take note of their coverage is the best recognition.

As the school year winds down, Rowan has been doing his fair bit of reflecting on his time with Wordsworth. He said there’s something about a hyperlocal school environment that underscores the importance of news when you see students reacting in real time to the work you’re putting out there. By the same token, he said he’s also come to appreciate the importance of shedding a light on issues that aren’t being talked about and starting a dialogue.

He’s hesitant to say what career he has in mind. He said given the rate at which things change, the job he has in mind today may be radically different four years from now. But he’s not ruling anything out – not even the “Today” show.