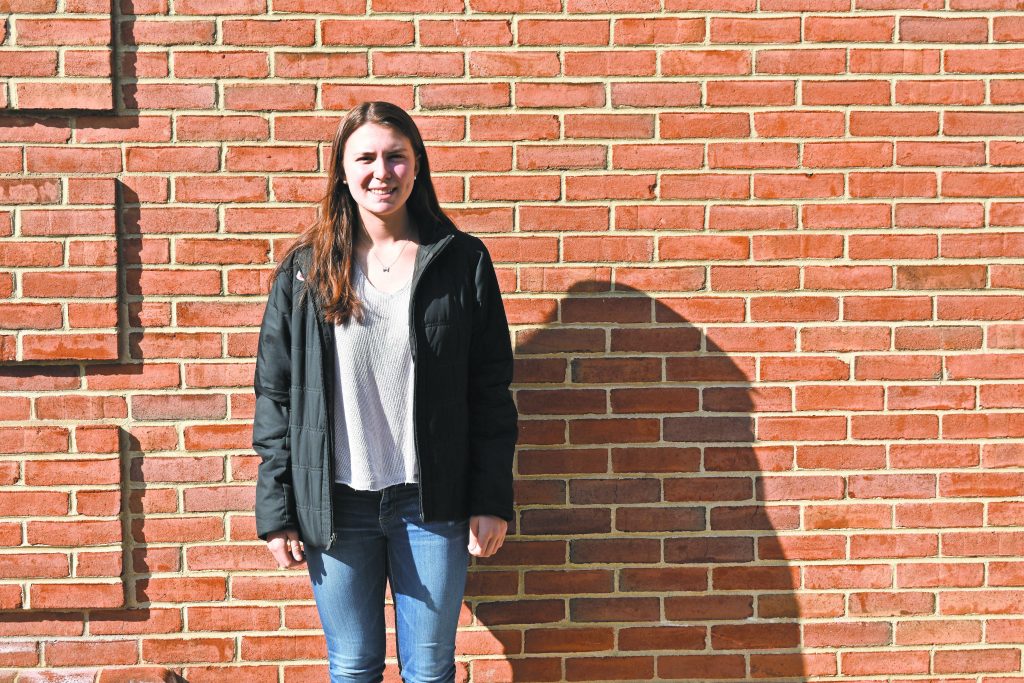 Now a senior at The Lawrenceville School, the Moorestown native recently travelled to Japan to compete on the USA Hockey U18 Women’s World Championship team, and she’s committed to playing ice hockey at Princeton University in the fall. Whether it’s playing against boys or travelling two hours for practice, Monihan has made a breakaway and is undeterred by being a woman in a male-dominated sport.

Monihan got her hockey start through the Moorestown Youth Street Hockey Association. She learned to rollerblade and was the sole kindergartener playing with a group of fifth graders. From there, she went to a learn to skate program, and after a couple months getting comfortable on the ice, she transitioned into a learn to play hockey program. By age 7, she was trying out for travel teams through Flyers Youth in Voorhees.

Given she was the only player who could skate backward, she wound up playing defenseman, but when her team disbanded, she briefly played forward on her new Pee Wee Boys A team.

“It was like a whole new world for me. I had never played forward and that really challenged my thinking as a player,” Monihan said. “I had to learn a totally new system from what I had known.”

During her last year of Pee Wee hockey, Monihan made a Tier 1 team. She was back to playing defenseman, and the game was faster than ever. She had to learn a new style yet again. She knew there was always someone coming after her, so she got faster and smarter. She said she always had to think about how she was going to protect herself.

Around age 14, Monihan made the switch to girls’ hockey and started playing with the New Jersey Colonials in Morristown. The commute was two hours, one way. Twice a week, her mother picked her up from William Allen Middle School and drove her two hours with Monihan studiously completing her homework in the car. She was back home and in bed by 11 p.m. on those nights.

At the same time, she was also taking private lessons once a week with a coach who taught her in the mornings at The Lawrenceville School. From age 10 to 14, Monihan woke up at 5 a.m., drove 45 minutes to Lawrenceville, skated for 45 minutes and returned back to Moorestown just in time for school. Whether it was early mornings or late nights, she was undeterred.

“I always wanted to be on the ice as much as I could,” Monihan said.

Given the scarcity of girls’ hockey teams and the long commutes, Monihan ultimately chose to attend The Lawrenceville School for high school. She was never interested in committing to just one sport, and the school’s three sport policy – one per season – enabled her to try her hand at others throughout the school year. As luck would have it, not too long after Monihan started at Lawrenceville, the Colonials moved their practices from Morristown to Lawrenceville.

In addition to playing on the Colonials and the Lawrenceville team, Monihan regularly tried out for the U.S. Hockey Nationals’ regional camps. This past year, she made the U18 select camp, which consists of the top 70 players in the country. After the camp, the top 30 players are invited to a festival where they can tryout for the USA Hockey U18 Women’s World Championship team. Monihan was selected as an alternate for the festival, but undeterred, she quietly continued to work on her game at home.

Despite not making it to the festival, Monihan received a call in December in which she was offered a spot on the team. She was in shock.

In January, Monihan and 22 other girls left for the Ice Hockey World Championships in Obihiro, Japan. The team was treated like professional athletes with trainers on hand to make sure the girls were in peak physical shape, professionals to sharpen skates and nutritionists making certain the girls ate well.

The competition was fierce. In their first game against Russia, the Russian team came out harder than the girls were expecting, but ultimately, the girls went undefeated until the final round. Monihan said listening to the national anthem play after every win was indescribable.

“I can’t even put words to the feeling when they played that U.S. anthem,” Monihan said. “I think it’s one of the most pure feelings of joy I’ve felt.”

The team faced Canada in the final round. They started the game up by two, but the American team battled back and tied up the game. However, the Canadians emerged victorious in overtime. Despite going home with silver, Monihan said the girls all felt tremendous pride in wearing the same jerseys as the 2018 U.S. Olympic Team and bringing home silver.

Monihan has committed to play at Princeton in the fall. She’s not sure what she’ll major in or where her hockey career my lead her, but she isn’t ruling anything out.

She said being a female in a male-dominated sport has proven to be something pretty special.

Women’s hockey is growing in popularity, and Monihan said it’s only recently that she’s realized she’s part of that growth.

“Now, every time I step on the ice, I hope in some way I am inspiring other girls to play the sport I love,” Monihan said.