Hooker collected her first Meet of Champions medal earlier this month with a 5–8 high jump. It could jumpstart her to a memorable spring season.

The collection of medals and plaques the Timber Creek High School junior fished through to find the right one must have made her Nike backpack weigh more than anyone else’s at the school — even the kid lugging his pre-calculus and chemistry textbooks home.

This is the result of 10 years of hard work and passion for a sport. This, a seemingly never-ending collection of awards from track and field meets near and far, is Tierra Hooker’s treasure chest.

Finding something you like is one thing for a teenager. Finding it long before your teen years and during a time when your peers are playing t-ball is another.

But Hooker isn’t a one-sport specialist either. She tried cheerleading when she was younger and played rugby as recently as two years ago.

Track, though, was the sweet spot, competitive and physical enough, but not the vicious knee-to-the-thigh-tackle kind of physical.

“It’s just too rough for me,” Hooker said of rugby, her older sister’s sport of choice. “Rugby honestly taught me to be tough. People are going to knock you down, but you have to get right back up.”

The 16-year-old Hooker used to fill out her sister’s rugby team two years ago — “when they needed extra people they would call me because I’m fast” — but those days are over, as they should be when you’re chasing down championships and Division-I scholarships as a gifted runner.

After second-place finishes at the Meet of Champions in her first two high school seasons, Hooker collected her first MoC title last month in the high jump (5-foot-8) and placed third in the hurdles (8.25).

Already having established herself as one of the top track and field athletes in the state, Hooker will move into the spring season with another decoration to add to her collection of honors: she is The Sun Newspapers Girls Winter Track Athlete of the Year.

“That’s the best part as a coach,” Timber Creek track and field coach Erik Geisinger said of watching Hooker’s combination of God-given talent and strong work ethic leading to regular honors. “She grew up with track and field, her family. She started in elementary school. The AAU coach got a hold of her. So she started young, and when she came in here she was already jumping 5–9.”

Athletics surely run in her family. Hooker’s aforementioned older sister, Timber Creek senior Tiyanna Hooker, was a breakout wrestler during this winter in the sport’s first officially-sanctioned season for females in New Jersey. And Tiyanna is going to college on a rugby scholarship.

The girls’ mother, Dannelle Wilson, ran track at Camden. The competitive family dynamic has gotten the best out of everyone in the household.

“My mom always talks about me for track, and my sister doesn’t like her bragging about me so she began wrestling and practiced more and more at rugby and got really out of nowhere and started going to (play for) national teams,” Tierra Hooker said. “So I kind of push her to be better.”

Hooker’s own push comes from her love of the sport. It’s what she thinks about before the gun goes off in a race.

“I just try to remember when I started, to remember to run with my heart instead of my legs,” she said, “so it pushes me more to run harder than other people.”

The push continues off the track, too. Hooker’s short-term goals are to make it onto the U-20 national team that will compete in the Pan American Games in Peru this summer. Next summer, she’d like to make a run at every track and field athlete’s ultimate goal: a spot on the United States Olympic team.

And just like her sister, she’s eager to realize the goal of obtaining a college scholarship. A multi-talented athlete who could specialize in the decathlon in college, Hooker has already been in contact with the University of Georgia and had a trip planned for the University of Texas in late-March.

“It’s going good, been kind of fun,” she said of the recruiting process.

When that process is over, Hooker can take the acceptance letter and place it for safekeeping in her backpack of gold, too. And when the younger girls on her high school or club teams look at her and wonder what it takes to collect their own loot, Hooker can play the role of leader.

“I tell them to stay patient and keep working hard,” she said. “And when things do get hard, get right back up and keep trying.” 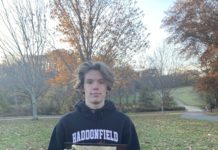 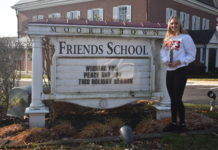