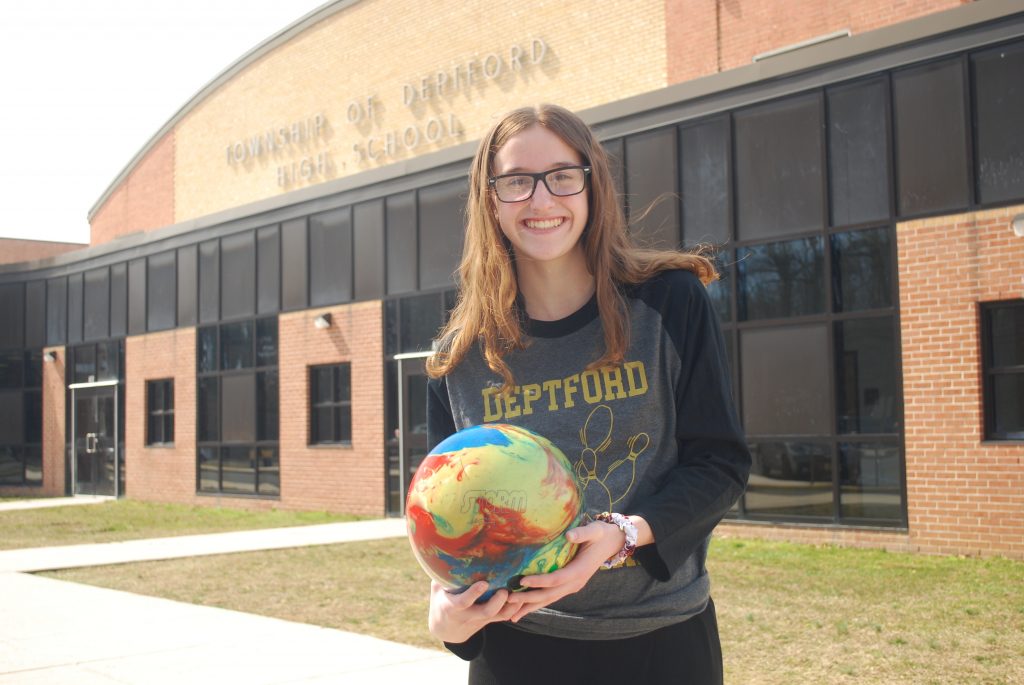 As the youngest of four children, you’d almost expect that Paige Clegg decided to pick up a bowling ball because one of her older siblings had success at the sport. Or perhaps her mom or dad were regulars in a local league.

Instead, Clegg, a standout sophomore at Deptford Township High School, kind of stumbled into the sport.

“It was just something I liked to do as a kid, birthday parties, random occasions,” she said. “And my mom was like, ‘Why don’t we put you in a kids league, and have fun with it?’”

Clegg became a good enough bowler that going out for the bowling team felt like the natural progression when she arrived in high school last year. A year later, not even midway through her high school career, Clegg’s meteoric rise in the sport has reached new heights: She is The Sun Newspaper’s Girls Bowler of the Year.

Clegg’s 566 series at the state tournament was the highest of any girl in South Jersey, and her regular season average game of 179.5 was the best among her peers, too.

“I never pictured myself as ‘athlete of the year’ or even advancing as far as I did this year,” Clegg said. “But being there, it’s kind of breath-taking. I feel like it was worth fighting for, worth working for.”

Clegg’s path toward bowling success was one paved by good, old-fashioned hard work. As a freshman, Clegg was competitive (average game score of 155) but there was also room to improve.

Enter George Wagner III, a coach who saw her in action at Brunswick Zone on Delsea Drive.

“You’re doing something wrong,” Wagner told the then-freshman bowler. “You’re not letting go of the ball right. It looks unnatural and uncomfortable.”

Clegg had no idea. She thought what she was doing was natural. But she was open to suggestions and help, so she took Wagner’s advice and worked with him regularly during the spring and summer.

“It was a process,” she said. “It wasn’t like it was an overnight thing and then it clicked; it took practice. And there were some days I would stand at the foul line and do nothing else but stand at the foul line and try to get it to come off my hand right. “And then once it clicked, once I got it to the point where I was releasing it right, then it was a whole adjustment, it was now I have a lot more curve on the ball because it comes off my hand right, it gets the right rotation. So then it was just placement after that.”

Suddenly, Clegg went from a competent, competitive bowler to one who could hang with anyone in the state.

“It’s honestly crazy to think about,” she said. “I never expected (this). I thought I was a decent bowler last year. I didn’t think there was anything wrong with how I threw the ball. And then to come into this year and see that there was so much improvement, so much growth, and so much more that I could do, it was unbelievable.”

Clegg, who bowled a 583 series at the South Jersey sectionals this year, has two more scholastic seasons to aim for a new goal: to become the area’s first state champion since 2012. That was the last year South Jersey had a champion, when it swept the girls and boys tournaments as Washington Township’s Nicolette Sarin and Kingway’s Diante Fields were crowned state champions.

She’s also begun to look into bowling in college, even though high school graduation is still more than two years away. The journey from bowling at birthday parties to considering a collegiate career has been a bit of a whirlwind for Clegg, but in the very best way.

‘Something that needs to be addressed’