Pigeons are one of the most common birds across the globe, and because of their adaptability, in many different environments they are symbols of resilience and devotion. While symbolically the pigeon is fitting for Paige Colucci, it’s doubtful that’s what her grappling partner had in mind when he called her “Pigeon” for the first time.

“When I started jiu-jitsu a guy asked me what my name was and I said ‘Paige.’ He said ‘Pidge? Nice to meet you!’ and ‘Pidge’ turned into ‘Pigeon,’” Colucci recalled.

Colucci mimicked the resilience of a pigeon adapting to a new environment when she began her wrestling career as senior at Williamstown High School. Not only did she join the team, she slowly but surely became a staple in the South Jersey girl’s wrestling scene, piling win after win en route to a 17–0 season and a first-place finish at the inaugural southern regional tournament.

The perfect record, coupled with the first place finish at the regional tournament, led to Colucci qualifying for the state tournament. While the storybook ending didn’t come to fruition, she did finish fourth in the state.

“It was a really good year,” she said. “It was fun while it lasted. Sometimes things don’t go the way you planned, but all you can do now is learn from it, do better and get back out there.”

Colucci doesn’t currently have plans to wrestle in college but she is open to wrestling if the opportunity presents itself. In the meantime, she is excited to get back on the mat and train jiu-jitsu.

With the roller coaster ride finally at a stop, Colucci’s two coaches looked back on her historic season.

“We can finally answer the question if we’re proud of her,” Coach John DeAngelis said. “We couldn’t be any more proud. She had to go through a lot of adversity that a lot of other people in this sport don’t ever have to go through. She fought through a lot of things and gained the respect of not only the wrestling room and coaches but the whole entire school, and community really rallied around her. I think she did something this year that’s really good for girls, period. She was the poster child in Williamstown for girls being strong and being able to defend themselves. It was a really awesome moment that we’ll never forget.”

“It was phenomenal. All these girls are pioneers,” Coach Bob Bastien said. “She’s the face of Williamstown wrestling for girls. It was just an honor. I’m proud of her.”

Being a girl wrestler trying to win the first female state tournament was not something Colucci set out to do when the season began. In fact, she didn’t even see her gender as an obstacle.

“I’m very, very grateful to have the coaches I have,” she said. “I never saw my gender as a thing. I was just a kid who wanted to wrestle, and that’s what they thought, too. I wanted to beat boys the way I beat girls, they wanted the same for me. They could have easily just let me practice and sit me out but they gave me a lot of matches and a lot of mat time, and I’m very grateful for that.”

Colucci’s even-keeled, never-too-high, never-too-low attitude is something that is beyond her years as a teenager. Despite having her season, and possibly career, come to a close, she handled the situation with grace. She didn’t have to look beyond the tattoo on her arm for a reminder to do so. Lyrics to the H2O song “Family Tree” are tattooed on her arm.

“She took an opportunity and ran with it,” Bastien said. “You get an opportunity like that you can do one of two things with it: you can either fold and go away or take it head-on and that’s what she did. She took the opportunity in front of her and she went with it. She created this success because she worked hard and wanted it.” 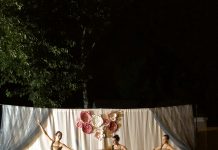