The community is invited to attend the 14th annual Cherry Hill Volvo Cars Jewish Film Festival of the Katz JCC. The weeklong film festival takes place Sunday, March 31 through Sunday, April 7 and will feature 22 award-winning films along with several guest speakers including writers, directors, producers and editors. All weekday matinee films will be screened at the Katz JCC in Cherry Hill. Evening and Sunday films will be held at AMC Voorhees 16 in Voorhees.

Kicking off the festival on Sunday, March 31 is the feature film “The Samuel Project,” a family-friendly dramedy. Samuel reconnects with his grandson, Eli, when he is made the subject of Eli’s high school project. Eli discovers that Samuel was heroically saved from Nazi capture in Germany during World War II, and after some hesitation, Samuel agrees to tell his story, which he has kept secret for 75 years. Preceding the film, Antony Post, a Haddonfield Memorial High School student will present the World Premiere of his film, “Tikkun Olam.”

“Sammy Davis, Jr: I’ve Gotta Be Me” will premiere on opening night, Sunday, March 31 at 7:30 p.m. This is the first major film documentary to examine Davis’ vast talents and his journey for identity through the shifting tides of civil rights and racial progress in America. Davis was the most public black figure in his time to embrace Judaism, thereby yoking his identity to another persecuted minority. This documentary will be prefaced by “You Got Ma’amed,” a comedic short written, directed and produced by Cherry Hill native Michael Kelberg and produced by former Film Festival committee member Jennifer Dollinger-Woods.

Filmgoers won’t want to miss the stunning documentary “After Auschwitz,” which follows six extraordinary women, capturing what it means to move from tragedy and trauma towards life. All six women moved to Los Angeles where they married and raised children, but never really found a true place to call home. This film is presented in collaboration with the Esther Raab Holocaust Museum and Goodwin Education Center. “After Auschwitz” will be screened on Tuesday, April 2 at 7pm.

A don’t miss drama screening at this year’s festival is “Shoelaces,” which tells the story of a complicated relationship between an aging father, Reuben and Gadi, his son with special needs. Thoughtful, poignant and unexpectedly funny, the film explores the complex dynamics of adult parent-child relationships. “Shoelaces” will be screened on Wednesday, April 3 at 7 p.m. at AMC Voorhees 16.

Tuesday, April 2 is the festival’s special screening with lunch, and this year will feature “The Mamboniks,” a feature length documentary that tells the untold story of the Jewish love affair with Latin music and explores a mostly unexamined aspect of Jewish life and culture.

On closing night of the festival, Sunday, April 7, enjoy “The Last Suit,” a drama that centers on Holocaust survivor Abraham who, fueled by a sense of duty, and a quest for closure and fulfillment, decides that the moment has come to fulfill a promise. With assistance from strangers, the sharply-dressed suit maker travels to Poland, in search of the man who saved him from certain death at Auschwitz. “The Last Suit” will be prefaced by comedic short “Spring Chicken,” which tells the story of 94-year old woman, Anny, who loves to dress up for the Jewish holiday in Purim. So much so, in fact, that she’s the three-time champion of her retirement home’s annual costume contest.

The above selections are just a few of the highly acclaimed films at this year’s event. Patron and series ticket holders receive tremendous perks such as exclusive receptions and reserved seating. Tickets for individual screenings can be purchased starting at $10. Group discounts, available for groups of 10 or more, must be purchased in person or by phone by Wednesday, March 27. 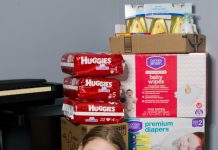