Catch up on what happened this week in Tabernacle.

Six of the Lenape Regional High School District’s eight sending districts have joined together with officials from the high school district to plan a course of action to reverse what officials describe as “drastic” cuts in state aid funding.

According to officials at a community forum at Shawnee High School last week, cuts will negatively impact the K-8 districts in Evesham, Medford, Shamong, Southampton, Tabernacle and Woodland, along with the Lenape Regional High School District itself.

All together, officials say these local districts stand to lose a combined total of about $24 million by the 2024–2025 school year.

At this week’s committee meeting, topics were discussed that will be added to the work session meeting on March 11.

Committeeman Stephen Lee suggested an update on potential rotaries to be implemented outside of town hall at the intersection of Carranza Road and Chatsworth Road, along with outside of Seneca High School.

Lee stated that when he was mayor in 2013, he met with members of the Lenape Regional High School District and the Burlington County engineering office to put together a study for that intersection, although nothing further came of the study. He also mentioned Mayor Joseph Barton and Township Administrator Doug Cramer met with officials last year regarding the rotary, but again nothing further came of it.

Lines on the Pines: The annual celebration of the Pine Barrens is back for its 14th year

“How could we bring like-minded people together to celebrate and maintain the cultural richness of the New Jersey Pine Barrens?”

This was the question posed by Linda Stanton that started the annual “Lines on the Pines” 14 years ago.

The event was originally formed as a way to bring local authors of the Pine Barrens together to discuss history and folktales of the area.

Over the years, “Lines on the Pines” has evolved into an event that features not only authors, but crafters, photographers, musicians, historians and more, with the common goal of celebrating the unique culture of the Pine Barrens.

This year’s event will be held on Sunday, March 10, from 11 a.m. to 4 p.m. at Stockton University’s Campus Center, located at 101 Vera King Farris Drive in Galloway. 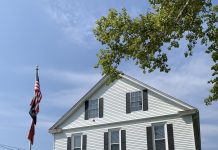