The Golden Eagles made another run to the NJSIAA Group II state championship in 2018 before falling short to West Essex High School.

In 2017, Seneca High School field hockey announced their arrival as one of the state’s top programs when they advanced to the NJSIAA Group II state championship for the first time.

With a combination of old and new faces guiding the way, Seneca repeated as Central Jersey Group II champions in 2018 and advanced to the state championships for the second year in a row. While the Golden Eagles fell short against West Essex High School, 4–0, in the NJSIAA Group II state championship, the loss doesn’t damper a season where Seneca felt they established themselves as an annual championship contender.

“We’re still very proud of where we’ve come this year,” first-year head coach Kristina Foster said. “It was a good transition for them, for us as a staff. It’s unfortunate the outcome, however, we still keep our heads high because we know what it takes to come back for next year.”

Fresh off the program’s first ever trip to the state finals in 2017, Seneca returned a number of key players from last season, including sophomore standouts Cassidy Strittmatter and Olivia Quagliero and senior leaders such as Linden Webb and Jenna Flemings. Combined with the emergence of freshmen Sophia Abate and Tess Strittmatter, the Golden Eagles had another successful year, going 12–6 in the regular season.

In the playoffs, the №2 seeded Golden Eagles rolled through the Central Jersey Group II tournament for the second straight year. Seneca cruised through their first two playoffs games and, just like in 2017, went on the road to win the sectional title. The Golden Eagles defeated Wall Township High School, 2–0 to win the Central Jersey Group II championship. The next game, Seneca edged out South Jersey champion West Deptford High School, 2–1, to send the team back to the state championship game.

“We did want to prove that last year wasn’t just luck,” Flemings said. “We got here and we were able to do it again. You can’t say last year was luck.”

While the Golden Eagles certainly have the talent to make deep playoff runs, perhaps the biggest hallmark of the team is its chemistry. Prior to the start of the state title game, Seneca’s players could be found in a circle, arm-in-arm with one another. After losing to West Essex, the same scene was repeated, with Seneca’s players arm-in-arm. The final word the team said prior to breaking the huddle said it all: family.

“It’s a big deal to say family at the end of the day,” Flemings said. “We care a lot about each other and to get out here and say it one last time, it hurts. But it’s something we’ve had all four years of high school. When you walk into Seneca, they say family from the get-go.”

“It’s one of the greatest things to have all of those girls behind you and everyone in the school behind you and cheering for you, because we’re all really that close,” Flemings added.

Foster believes that family bond helped Seneca both in wins and losses. After falling behind early against West Essex, the Golden Eagles used a timeout to settle down. They would hang in the game for much of the way, keeping the deficit to 2–0 well into the second half before allowing a pair of late goals.

“It’s always tough, because they are young kids and we do have a young team,” Foster said. “We have not been scored on first in a pretty long time. It was good to see their reaction to adversity.”

“We’re still family and we stick together, win or lose,” Foster later added.

“They are hungry for more,” Foster said. “Now losing two years in a row, same game, especially with this young team, I think they’re going to work twice as hard next year.”

“There are some talented kids on this team,” Flemings said of her younger teammates. “I believe they can do anything they want.” 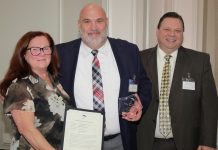