David Scolari said his upbringing was fashioned by kind, motivation-instilling parents. “They gave me opportunities to learn new things,” he said.

He attributes his family life as the reason why he became the program director at the Community Connections Outreach Program, which is headquartered in the same building as the Gloucester Township Police Department.

The CCOP is a nonprofit that offers programs aimed at strengthening the bond between family members and a family’s connection to their community.

“It is all available to anyone. We are family focused but still open to individuals if they need help. Income level does not matter,” Scolari said, noting all services are free.

During the center’s four-year existence, funding has come from the Camden County Community Planning and Advocacy Council — another nonprofit, but with a focus of supporting programs such as the CCOP.

The have also gained support from the Gloucester Township Police Department.

The statement went on to explain a police department should also focus on crime prevention (second gear) and intervention (third gear).

Scolari said the partnership between CCOP and the police department can “keep kids out of the justice system.”

The presence of police officers at multiple events and the department promoting the events allows for a new avenue in community and police relationship, Scolari explained.

“This encourages positive interactions with the police department,” he said. 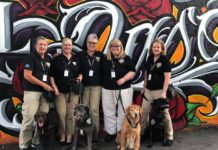