Haddonfield Memorial High School’s Stand With Camden decided to take matters into its own hands and help a Camden County community gain access to reading materials.

Opening a book can inspire students to gain knowledge about the world around them and better their future. This is the mentality Haddonfield Memorial High School’s Stand With Camden had when it decided to take matters into its own hands and help a Camden County community gain access to reading materials.

The group emerged in 2011 from two former students, Meghan Knecht and Nick Gangemi, with the goal to participate in the partner program at UrbanPromise, where HMHS students sponsor school tuition of CamdenForward School students. Since the group came to fruition seven years ago, it has expanded and helped Camden students gather the resources needed to blossom.

Last week, Stand With Camden partnered with BookSmiles, which collects books for those with little access to them and distributes them throughout South Jersey, more specifically, Camden County. Although the drive ended on Friday, March 2, for Read Across America Day, the group still finds ways to give back to the community.

“The character of all of the people involved with Camden Reads is unselfish,” Ward said.

Camden Reads consists of students affiliated with Stand With Camden going to local elementary schools and collecting just shy of 400 scholastic, educational magazines for elementary school students kindergarten through sixth grade at Holy Name School and St. Anthony of Padua School in Camden, according to Ward.

After Stand With Camden members sort through the books by grade level, they drop them off at the schools once a month and designate time to read to the students while they are there.

“I see it as if I work hard for my education, I try to do the best I can. If someone else is willing to do that, why should they be at a disadvantage just because their district is different than mine?” club officer and HMHS student Alex Townsend said. “So it’s just fullfing to try to equal that out.”

She further explained all students, no matter where they live, should be given the opportunity to gain access to books.

Club officer Liv Alberto was given a new appreciation for something she had once taken for granted and was excited to participate in Camden Reads.

“When we were in elementary school, we may have not thought much of them (magazines) … but the kids in Camden are excited to hold these magazines,” Alberto added. “It’s nothing they would have gotten without us.”

Other students felt it was their responsibility to promote reading in schools.

“I have been given so many opportunities in life, and now that I have reached this realization that now it is my job to kind of provide people with the opportunities that are not always easily accessible to them,” club officer Maddie Broder said. “That’s why I love doing what I do. It allows us to give the opportunities to these students in Camden.”

Stand With Camden Club advisor and HMHS teacher Kimberly Dickstein has worked side-by-side with the students in supporting literacy in surrounding communities, specifically Camden. She has encouraged her students to understand the socioeconomics of each town and find ways to help, which she believes they have done and will continue to do.

“I’m giving back in every which way I can, and it is really incredible to see my students have an understanding like this. I think one of the most impressive things is it is unselfish and having a really deep understanding of social justice,” Dickstein said. “That’s what this is about.” 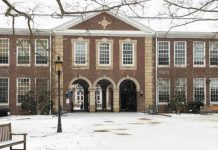