Smith hopes to make a career out of playing the sport she loves the most.

In January, during Erin Smith’s senior year at Rutgers University, she accomplished what she wasn’t quite sure was possible just a year or so ago: she got drafted.

During the fourth round of the of the National Women’s Soccer League College Draft, the Houston Dash selected Smith, a graduate of Shawnee High School, 33rd overall.

“It’s been my dream since I was a little girl to play professionally,” said Smith, a Medford Lakes resident who turns 22 on Friday. “So when I was drafted to Houston, I was really excited to play there.”

After being drafted, Smith stayed at Rutgers-New Brunswick to finish her last few months of school at Rutgers, where he earned her bachelor’s degree in sociology while minoring in psychology. During her spring break, she flew to Texas to train with the team, and promptly came back upon the conclusion of her break. She planned to stay in New Jersey to study at Rutgers until she graduated in May. She would come back after graduation and rejoin the team midseason, as the NWSL season starts in March.

However, by the time Smith graduated, the team’s coach had been fired, throwing off Smith’s plans.

Because the new coach wasn’t familiar with Smith, he couldn’t guarantee her a spot on the team. Instead, he offered her an uncontracted practice spot, allowing her to practice with the team. This way, she could potentially earn a spot on the team in the future. But Smith turned it down.

“I’m the first person to ever do that,” she said.

“I was a little upset, but I wasn’t mad,” she added, saying she understood it’s simply the nature of the business. “I wasn’t resentful because that’s what happens.”

Instead, Smith is opting to stay in New Jersey and give soccer lessons to children with the hope of trying out for another team next year when Houston’s rights to sign her expire. Because Houston owns her rights, she can’t play for another team until then unless Houston trades her.

Ideally she’d like to play for Sky Blue FC, New Jersey’s NWSL team based in Piscataway Township. This way she can stay in New Jersey.

“I think it would be cool if another team did want me, but I’m very Jersey Strong and prideful so I would love to have my family and friends come watch me,” she said.

Among Smith’s biggest supporters is her boyfriend, Kamu Grugier-Hill.

Like Smith, Grugier-Hill also lives a very active lifestyle. In fact, he’s a linebacker for the Philadelphia Eagles.

“She keeps me going,” he said of Smith. “Sometimes I feel lazy and she’s like ‘get up!’ Yesterday was one of those days, so she’s definitely a huge support for me, and I feel like I try to support her as much as I can in her field.”

The two feed off each other.

“We have a basketball court right there,” she said as she pointed out her backyard window. “And we go at each other.”

“I’m embarrassed to say this but she beats me in horse all the time,” Grugier-Hill said. “We’re both just really competitive.”

If you’re interested in your son or daughter getting soccer lessons with Smith, she can be contacted at smith_erin16@yahoo.com. 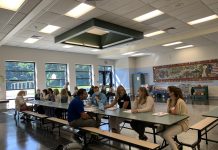