This past January, the department set out to have a bicycle patrol in place by July 1, so that the patrol could be up and running for Haddonfield’s July events.

Haddonfield police Lt. Jason Culter said the police department had a bicycle patrol in the 1990s that faded out of commission around 2001. However, when some fresh blood came on the force, a new officer suggested reinstating the force, and so as of July, Haddonfield’s bicycle patrol has returned.

“We thought it would be a terrific idea to get police closer to the people they serve,” said

Officer Joseph Marano saw Haddonfield’s downtown lent itself to bicycle patrol. He said he wanted to bridge the gap between motorized patrol and officers on foot. He said there’s an approachability about officers when they are on their bikes that they don’t have in their patrol cars. So, in 2015 Marano wrote a proposal detailing why he thought a bicycle patrol was a feasible option for the town.

This past January, the department set out to have a bicycle patrol in place by July 1, so it could be up and running for Haddonfield’s July events: the Fourth of July and the Haddonfield Crafts and Fine Art Festival.

With a group of new officers coming into the department who had to do training, they decided to add the bicycle training. Cutler said officers spent a week in Upper Darby training with the International Police Mountain Bike Association, and the bicycle patrol consists of five Haddonfield police officers.

“They were very excited about it and took ownership of it right away,” Rochford said.

Bicycle patrols will also be event-driven when needed, Rochford said. He anticipates the force being particularly useful for the Rotary Club’s concerts and street festivals.

Cutler said the patrol proved its worth during the borough’s Fourth of July festivities. He said officers were able to be responsive and get through crowds quickly in ways they hadn’t been able to do on foot or in their squad cars. He said he was able to utilize his officers more this year than he had previously.

“They were invaluable at getting through the crowds,” Cutler said.

The force will be a particular asset to the business district, Rochford said. When officers are in their cars, they’re not as visible to merchants and the community, but on bikes officers can actively interact with people as they shop the streets of Haddonfield, he said.

Rochford said officers on the streets will also help pedestrians cross safely, as distracted drivers are more likely to see the bicycles and be more vigilant about pedestrians in crosswalks.

Marano said his hope is pedestrians will want to come up to talk to officers and not be afraid to get to know their local police. 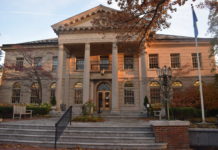