The student newspaper’s embrace of new media and fact-based coverage of news helped it get named Most Outstanding High School Newspaper in America by American Scholastic Press Association.

Walking into Cherry Hill High School East room F087 is like walking into a professional newsroom.

The classroom is the home base for Eastside, the student newspaper of Cherry Hill East. Last Tuesday during Journalism II class, senior Kaitlyn Boyle, one of three editors-in-chief for Eastside, was at the front of the room leading a discussion about the paper’s editorial for its final edition of the 2016–17 school year. After the meeting ended, staffers went to work, putting the finishing touches on articles, designing pages and collaborating on stories.

Eastside’s professional approach has been a big part of its recent success. In 2017, Eastside was one of 17 high school newspapers in the country named Most Outstanding High School Newspaper in America by the American Scholastic Press Association. The newspaper also received first place with special merit from ASPA and an award for best special content for a feature it did on the paper’s 50th anniversary this year.

There are a number of factors as to how Eastside has become such a force in the world of high school news. Its staff is very diverse and allows the organization to be an authority on a variety of topics.

Some staffers, such as junior Hope Rosenblatt, brought a love of news and writing with them to Eastside.

“Writing has always been my main subject,” Rosenblatt said. “Even since elementary school, I’ve always been a writer. Ever since I came to East, I knew I was going to be in a journalism class.”

Others had interest in other areas and later found a love for journalism. Junior Elissa Cohen came to the paper with a love of sports. She served as one of Eastside’s sports editors in 2016–17. Boyle brought a science and technology background when she joined Eastside.

The students begin their high school journalism careers in Journalism I where they learned the basics of the industry. After completing Journalism I, students can take Journalism II and apply to become an Eastside editor.

“My sister was an editor for Eastside,” Myers said. “She told me to take Journalism I my freshman year. I ended up falling in love with journalism as a whole.”

All of the students credit journalism teacher and Eastside advisor Greg Gagliardi for their success, saying he teaches them everything they need to know about how to create a successful news organization.

“He motivates all of us to do what we do,” junior Jared Fisch said. “He’s so good at his job and is passionate about his job.”

“Nobody wants to disappoint Gags,” Boyle said. “He taught us everything about journalism. He’s the reason we’re all here.”

Eastside’s print edition is published once a month, but the organization has separated itself from other high school publications through its embrace of digital media. Eastside operates on a daily news mentality, running stories regularly on its website, wwww.eastside-online.org, and using social media to catch the attention of the school community and those living outside of Cherry Hill. Eastside’s social media presence is greater than many professional news organizations.

Eastside also hosts podcasts on its Soundcloud account, giving students the freedom to host shows based on a variety of topics, such as politics and sports.

While Eastside has been successful in using the tools at its disposal, the staff realizes it’s important to provide quality content as well. Boyle said the staff preaches covering every side of a story, especially when there is a major issue in the school or in town.

“We cover both sides,” she said. “A lot of news sources need to do more of that.”

Senior Luke Hinnchs said many students have been following recent news and see how false facts in some stories have hurt the public’s trust in journalists. However, he feels Eastside’s staff is motivated to provide facts and quality coverage to its readers.

“Authorities will always question the validity of what you’re saying,” he said. “But when they question, that’s when you’re on the right track.”

The end of the school year is a transition time for Eastside. As current editors-in chief Boyle, Hinnchs and senior Ashley Cooper prepare for graduation, they are in the process of handing off the reins to next year’s editors-in-chief, Rosenblatt, Elissa Cohen and her twin sister, Sari.

Sari said the transition allows Eastside to continue its high quality reporting across generations of students. To become editor-in-chief, students must go through an application and selection process.

“It’s just making sure you choose the right people that will maintain the dedication and achieve the same recognitions,” Sari said.

Some of Eastside’s editors say they want to pursue a career in journalism, while others said they would major in other areas in college. Regardless of their future careers, however, everyone said they plan to support news in the future, with many vowing to get involved with the student-run newspapers at their colleges. 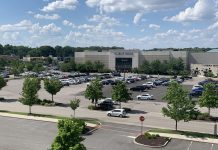 Diaper drive held for next 4 weeks at Cherry Hill Mall