The club has been serving Berlin Borough and Berlin Township for over 60 years, sending sight mobiles to schools and providing items in need to less fortunate families.

Greeting members of the Berlin Lions Club seems more like greeting one big family. Bob Bray called Concetta Sherlock his right hand lady, and the camaraderie between everyone couldn’t have been stronger.

This “family” bond is one reason why they have been able to work together so well to help and serve the Berlin Borough and Berlin Township communities for more than 60 years. Members are residents in both towns and surrounding towns including Winslow Township, Blackwood and Voorhees.

Lions Clubs International is the world’s largest service club organization with more than 1.4 million members in approximately 46,000 clubs around the world.

“Our motto is ‘we serve,’” member Lois Kelly said. “Those are the two words that encompass everything we should be doing. Initially, back in 1917 when the Lions organization in general was formed, the main purpose was about saving eyesight and preventing blindness, which is still our main purpose. However, the mission has broadened a lot since then. We are emphasizing more on working to help the communities of Berlin and Berlin Township, but we’re also financially supporting other organizations that primarily help those who are blind or have visual impairment.”

“We check children at school and send a sight mobile,” Bray explained. “Usually, we’ll take somewhere between 20 and 40 children, and usually 50 percent to 75 percent of them have eye problems that no one would have known about. We help them get corrected and guide them through that. We also provide hearing aids and do whatever we can as far as helping the misfortunate people in our town that can’t see and can’t hear.”

They also provide items such as winter coats, clothes and bed sheets to children and their families in the community who cannot afford them.

“There’s so many things we do,” Sherlock said. “We support the fire companies with their toy drives, we helped Berlin with their Easter Egg Hunt at the community center, and we give meals to families in need. We give anything that’s needed.”

The Lions Club has numerous fundraisers throughout the year such as spaghetti dinners, beef and beer banquets, painting parties and casino trips.

“Without those fundraisers, we wouldn’t be able to help,” Sherlock said. “We are always looking for new things to do to enable us to raise money. All the money we make goes out to the community.”

The club’s community reach goes beyond Berlin Borough and Berlin Township. It had enough donations to provide a Cherry Hill family with an autistic service dog, Mercy, last April. Twelve-year-old Jimmy Martin has a severe case of autism and also has epilepsy, which causes him to have seizures throughout the day and night. It got to the point where his mother, Debbie, had to sleep in Jimmy’s room because of all the seizures he was having. With Mercy by Jimmy’s side, she alerts his parents when he has seizures.

“The Lions Club has helped us because I didn’t sleep for a long time because I almost lost him (Jimmy),” Debbie said. “It was only by the grace of God I walked into him room one night when he was choking, which led me to start searching for a service dog two years ago. The Lions Club has given my son the gift to be independent. It’s been a miracle for us.”

Sherlock’s hearing impaired daughter and son who has diabetes is what drove her to join six years ago.

“It was so hard to find help for them, and I finally did, but my children are older now, and I thought, maybe I can help somebody who needs the help,” she explained. “I just wanted to give back to the community.”

Winslow Township resident Dana O’Hara joined in October, and the club has already made an impact on her.

“I really enjoy it because I like helping people,” she said. “It’s my mission to help people, especially the kids.”

“We’re not a real big club, but we have people involved that are so dedicated and willing to help in any way they can,” Sherlock said. “It just feels so good to see a smile on someone’s face, and it gives you such a peaceful feeling.”

The Berlin Lions Club meetings take place the first Tuesday of each month at the Berlin Community Center, located at 250 S. Franklin Ave., and the club is always looking for new members to help them serve the community. For more information, contact Bray at (609) 841–5326 or Rebraysr@bikerflyride.com. 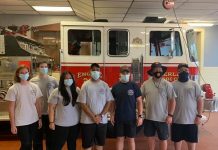