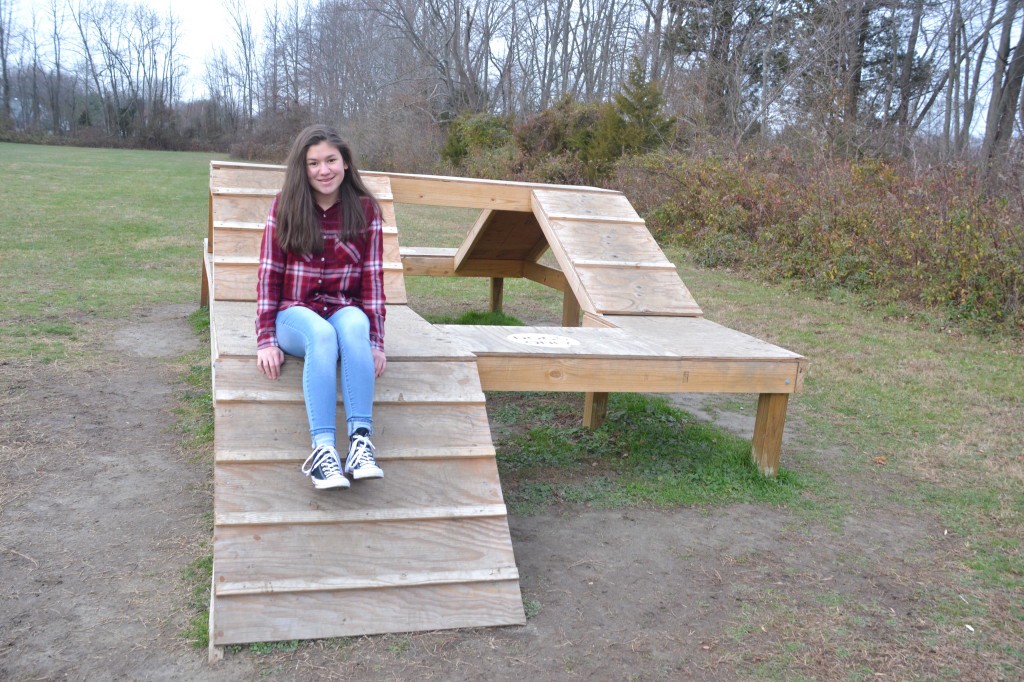 After her family recently adopted a dog, Maisy, and started frequenting the Freedom Barks dog park for exercise, Medford resident Megan Applegate knew she wanted to give back to the organization for providing and maintaining the resource. Thus, she dedicated her Girl Scout project to contributing to the park, and later earned the Silver Award as a result.

“I wanted to build something and to make a lasting difference in my community that I could come back to and visit for years,” Applegate, the 14-year-old freshman at Shawnee High School, said. “I choose [to build] a dog walk in hopes that it would bring people in our town together, and that small dog owners would feel more comfortable bringing their pets to the park.”

Before beginning the project, the member of Girl Scout Troop 23784 approached the Freedom Barks Committee to propose building an additional dog activity for dogs and dog owners to enjoy. The committee requested the activity be for small dogs as they did not yet have one designed for this size.

After receiving the requirements from the committee, Applegate researched various types of dog runs and designed a structure with multiple levels and multiple tunnels to engage smaller dogs. She then built a scale model to present to the committee.

Next, she refined the design based on their feedback, and after receiving approval for the project from the committee, Medford Township and the Girl Scouts of Central and Southern New Jersey, Applegate started building the structure in July.

With help from her fellow Girl Scouts, Devon and Quinlan Moll, she began the dog run’s installation at the park in August. The installation spanned several weeks and involved digging more than 10 postholes and squaring off and leveling a number of sections. However, even before the project’s completion, dog owners and their dogs were already enjoying the structure.

“It was exciting to see dogs use the walk. The project was hard work; it was hot and sweaty in August, but it was all worth it when I saw my work paying off,” Applegate said.

Dogs immediately took to exercising on the structure, and dog owners posted pictures of their dogs doing so on the Freedom Barks Facebook page. Additionally, as Applegate and her family were put the finishing touches on the project, dog owners came by to congratulate her on her project and to thank her for her effort in building it.

“It was a relief to finally finish. After all the hard work, it was good to know I had done something pretty cool,” Applegate said. “I was proud of what I did and the amount of work I put into it.”

For more information about Freedom Barks, visit http://www.freedombarks.com or its Facebook page, www.facebook.com/Freedom-Barks-Inc-of-Medford-1430047963948062.