Brian and Jenny Beadling both grew up with family dogs, but never in their wildest dreams did they imagine owning four at once.

That started to change when their Medford lake house’s deed directed them toward acquiring their first German Shorthaired Pointer, and the couple now finds itself spending most weekends traveling to dock diving competitions all over the country.

When the Beadlings first married in 2007, Jenny already had two miniature pinschers named Dante and Cleopatra — both not fans of the water. Then, one day, stemming from his work in mortgages, Brian was able to get ahold of the original deed to the couple’s lake house through a title company that looked the information up in its public records.

This deed showed that the original owner of their home and property, W. Glenn Pearce, owned an award-winning GSP, named Windy Spot, who often competed in the English Setter’s Club in historic Medford. Upon calling the club for more information and the possibility of acquiring a picture of the man and his dog to hang in their house, a family member of Pearce returned Brian’s call and told him a great deal about the GSP breed and history.

“When my husband found out about the dog he called me and said, ‘You’re never going to believe this, but I think we need to get a GSP.’ It was the first dog that ever lived in our house,” Jenny, who is a special education teacher at Indian Mills Memorial Middle School, said. “It all happened at once, but it all worked out this way and we couldn’t be any happier.”

At 11 weeks old, the first GSP the couple took in they named Limoncello. They would sit on the dock outside their house with “Cello,” and soon they began to notice that she would jump off the dock into the lake on her own. Her jumping began to occur so often that the couple’s neighbors would come gather around their dock on canoes to watch the dog take flight over the lake.

Eventually, Brian stumbled upon a dock diving competition broadcast on ESPN and thought Cello should give it a try. Their dock-diving endeavors began with the Fido Festival in Burlington County in September 2013 where Cello placed second. At this competition, they were told about another in Tuckerton, named Jumping into Jersey, where Cello placed first.

After witnessing Cello’s immediate success, the Beadlings decided to join the organization DockDogs, the world’s premier canine aquatics competition, and soon after acquired their second GSP Hooch from a breeder in Chatsworth. From there, the Beadling family, currently sponsored by TurboPup, began traveling to events and competitions three weekends out of the month from April to November.

Then, in August 2015, they received an unexpected phone call that a GSP who was a retired Explosives Detection Canine in Iraq for 18 months needed a home. The ex-military dog, Lager, absolutely loved the water and fit right in with the family. Also adding to the Beadling clan, this year Brian and Jenny decided to foster an English Pointer whom they later fell in love with, adopted and named Margarita.

Now a family of six, Brian and Jenny have renovated their home, which they named Windy Spot after the original owner’s dog, to accommodate their pooches and their special talents. Included in these renovations was converting their normal dock into one meeting the official dock diving regulations with a 40-foot turf runway and with a vertical wing.

Recently, Cello, Hooch and Lager attended the Canadian Regionals and have all qualified for their second World Championship to be held this November in Dubuque, Iowa. They all received invitations in every discipline they competed in, including Cello for Big Air and Iron Dog, and Lager and Hooch for Big Air and Extreme Vertical.

Brian and Jenny additionally plan to donate all toy and food prizes to the Voorhees Animal Orphanage and all cash prizes to the GSP Rescue of N.J. Whatever monetary prizes Lager personally wins will be donated to the GSP rescue, and the Beadlings plan to match that amount in a donation to the United States War Dog Association.

After three-and-a-half years of their involvement with the GSP community and dock diving competitions, the couple sees no signs of turning back. They have even invested in a five-wheeled mobile home so that their dogs can feel more at home and stable even while on the road.

“Our dogs are absolutely our children and they probably get spoiled more than a lot of two-legged children,” Jenny joked. “Brian and I are equally as competitive and obsessed with making most of our weekends all about our dogs and DockDogs.”

The 2016 DockDogs World Championships will take place from Wednesday, Nov. 9 through Sunday, Nov. 13 in the Five Flags Center in Dubuque, Iowa. Visit dockdogs.com for more information. 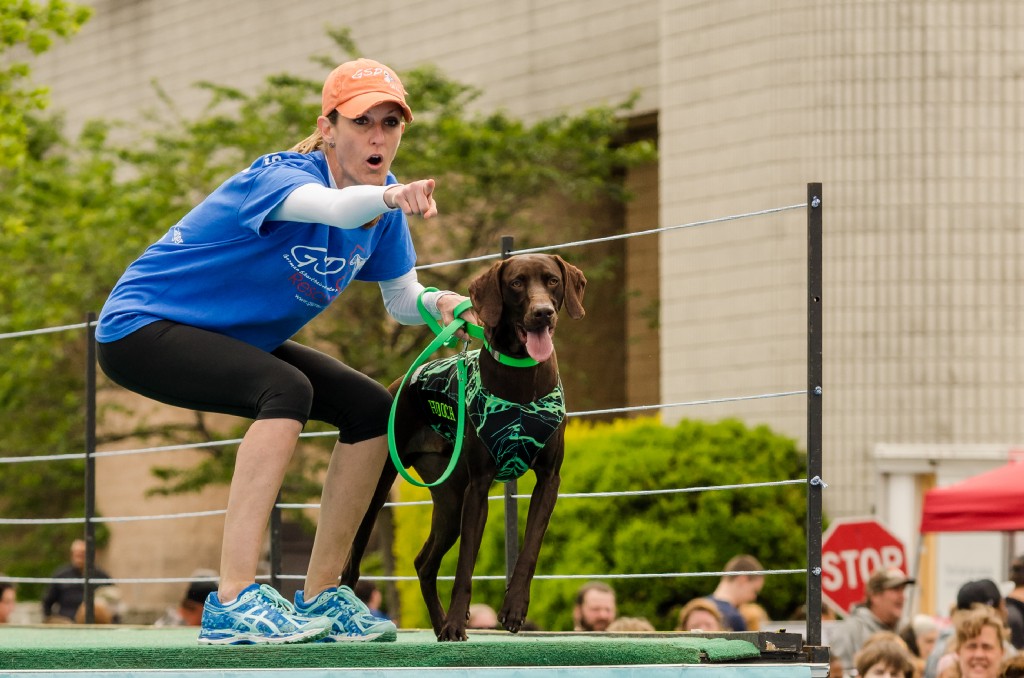