Another one bites the dust.

Although Queen’s 1980 hit wasn’t actually playing on June 7 when Evesham officials watched a backhoe tear into what they commonly refer to as “the old bank building” on Main Street, the sentiment of the song was certainly in the air.

The demolition was the latest in a series of rehabilitation and redevelopment projects throughout the township that Evesham officials have spent years working toward.

Mayor Randy Brown was on hand for the event and praised developer Bob Meyer for his plans to turn the property into a multiple-story complex with 24 apartments — 19 two-bedroom units and five one-bedroom units — and 4,000 square feet of commercial space.

“We’re very fortunate that we’ve got a guy in Bob Meyer who has the same vision we have — a vision of continuing to redevelop the downtown to make it a wonderful place for people to come, eat, live, walk and really just bring more vibrancy back to the downtown,” Brown said.

In turn, Meyer complimented Evesham Township and the governing body for taking what he described as a “proactive step” in having a vision study completed for Evesham’s downtown area.

According to Evesham Township Manager Tom Czerniecki, the idea of focusing township efforts on revitalizing Main Street started nearly a decade ago when the township developed a vision plan by soliciting input on nearly 150 items related to planning.

Czerniecki said the study helped the governing body hone in on the notion that residents basically wanted a downtown or “community living room” area along Main Street.

“That’s what this project represents — the development of a community living room,” Czerniecki said. “Not so much a recollection of what a main street historically used to be, and that’s what we have now, but what can it become.” 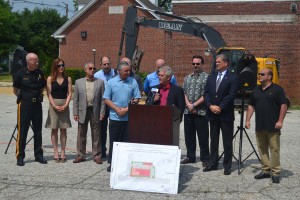 Meyer said the plans created for the new complex were based upon Evesham’s vision plan, both from the standpoint of land planning and the standpoint of creating a building that was aesthetically pleasing through its architecture.

“We’re extremely excited to be part of the project, part of the resurgence of Main Street in Marlton, to bring back some vibrancy to what is right now a place in need of redevelopment,” Meyer said.

Meyer said the former bank building had been an eyesore for more than a decade since it was last in use, and he expected to start construction on the new complex in about a month-and-a-half to two month’s time. He said he expected to open the complex in early spring 2017.

Evesham Director of Community Development Nancy Jamanow said the project marked the beginning of the redevelopment of the township’s Marlton Village area.

Already looking past the former bank building, Jamanow also noted redevelopment would next continue with a nearby project along the South Maple Avenue where 55 apartment units are currently slated.

Jamanow also said the township might not stop there.

“As a whole, the township is looking at all of Marlton Village to see how we can improve it to increase the population downtown and the businesses and just to make it a more walkable, viable community,” Jamanow said. 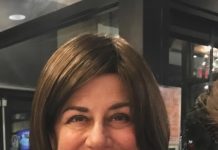 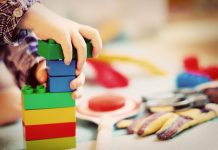