Sun Editorial: Let’s resolve to give back in 2016

There are many, though, living right here in our state who are not as lucky as we are. And these are the people who need our help the most.

We like to think of ourselves as giving people, but compared to the rest

of the country, that’s just not the

A study released recently by the Corporation for National and Community Service and the National Conference on Citizenship found that 22.5 percent of New Jersey residents volunteered their time in 2014.

That ranked us near the bottom, 45th, in the nation. Utah topped the list at 46 percent.

The study found that 1.61 million residents volunteered a total of more than 225.5 million hours of service. The stats counted only non-paid work as volunteering.

These numbers did get better since 2013, even if New Jersey’s overall ranking did not, as 1.45 million residents volunteered a total of more than 206 million hours of service that year.

Volunteering can be as simple as pitching in at a soup kitchen, coaching a Little League team or collecting trash at a public park. Doing a little can go a long way. What may seem as not much to most of us can have a huge impact to someone else.

So while you’re compiling your list of To Do’s for 2016, add giving back to the community by volunteering. You’ll be surprised at the impact you can have. 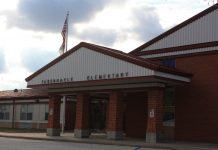 Board of education hears concerns about STOPit, LGBT curriculum