Eastside, the student newspaper of Cherry Hill High School East, is unlike any other high school news source in New Jersey.

Eastside’s in-depth coverage and multimedia efforts have made it the most accomplished high school newspaper in New Jersey and one of the best in the country. In October, the newspaper won the Garden State Scholastic Press Association’s New Jersey Distinguished Journalism Award for the seventh consecutive year. Last month, the staff traveled to Orlando, Fla., for the National High School Journalism Convention. There, Eastside students won 12 individual awards, the third-most of any school at the convention.

The building blocks for Eastside begin in journalism teacher Greg Gagliardi’s classes. Journalism one and two are academic electives at Cherry Hill East, and the class teaches students the inner workings of running a news organization.

Gagliardi emphasized the importance of the classes when it comes to Eastside. When students join Eastside’s staff, they walk into a real working news organization.

“We consider ourselves more of an actual newspaper than a school newspaper in the way that we function, the way the pages are put together and our editorial discussions have everyone talking about the issues and then coming to a consensus,” Gagliardi said.

At the end of journalism one, students can apply to become an editor. All students who are editors with Eastside take journalism two.

“We have a lengthy application process that includes an interview and a portfolio,” Gagliardi said. “For editor positions, you also have to make a presentation.”

Eastside’s staff is much larger than most high school newspapers. The organization has 37 editors, and more than 100 students contribute to the paper over the course of the school year.

The students working for Eastside come from all backgrounds. However, the one thing the editors have in common is they enjoy telling stories and they are passionate about the Cherry Hill East community.

“When I found that I could write an article that could impact at least one person, it was a whole different feeling for me,” managing editor Kaitlyn Boyle said.

“You see how your stories impact people when you write something or you interview someone,” co-editor-in-chief Julia Rothkoff said.

Eastside’s in-depth content allows it to stand out in the Cherry Hill East community. The school newspaper acts as a voice of and for the students, sometimes publishing stories on controversial topics such as PARCC testing or negotiations between Cherry Hill teachers and the board of education.

Boyle said Gagliardi teaches the students to write about important topics going on in the schools and to tell the story fairly.

“If we have a story we want to do that goes against the board of ed or the school district, (Gagliardi) encourages us to do that,” she said. “We’re not shut down by him.”

Eastside’s digital presence also stands out from other high school newspapers. Its website, www.eastside-online.org, is updated with new stories on a daily basis. Eastside’s YouTube channel features videos of important school events. Eastside also has a large following on social media, with more than 1,600 Twitter followers and 2,800 Facebook likes.

Eastside hasn’t just engaged the student body better online, it has also expanded its audience to alumni, parents and others outside the school community.

“I know of at least one person that follows the Eastside Twitter closely during every sporting event,” co-editor-in-chief Jacob Borowsky said. “Graduates keep up with sporting events and other things that are happening on our Twitter as well. If they can’t grab an issue because they’re at college or they’ve even graduated college already, they can look at the website.”

Eastside’s digital presence was built thanks to its quality content. The staff has found ways to connect with followers and get them to re-tweet, share or talk to others about Eastside’s efforts.

“We recently started live stream football games and we’re live streaming hockey games,” co-editor-in-chief Liza Rothkoff said. “Last year we did basketball. I know the basketball games last year got a lot of views. A lot of it comes from kids re-tweeting things they see on Eastside online.”

“People will see photos on Facebook and they realize they come from Eastside, so they’ll follow us,” Borowsky said.

Each year, the staff is determined to continue making the newspaper bigger and better. Winning awards on an annual basis is now expected. The editorial staff credits Gagliardi with much of Eastside’s success and believes the newspaper will continue to be one of the best as long as he is the paper’s advisor. 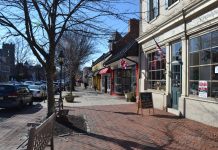