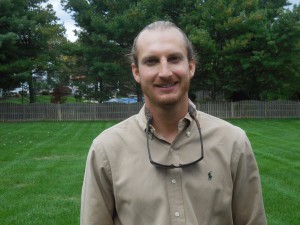 After spending his childhood in the suburbs of Mt. Laurel, hiking 2,200 miles from Georgia to Maine over a five-month period opened a whole new world for Christopher Quinn, so much so he felt passionate enough about his experience that he decided to write a book entitled “Adventures of a Trail Stooge” to share with the world.

“It was a journey that has changed my life, and I hope to convey that in my book,” Quinn said.

After being born in Long Island, N.Y., and growing up in Mt. Laurel, the deepest Quinn had ever gone into the woods was exploring the thicket of trees behind his neighborhood.

Going into high school, Quinn always had a passion for literature, but as he grew up, it seemed too romantic of an idea to be a feasible career path, as he put it.

He did his best to mask that love for writing by going to the University of Delaware to study business. This proved to not be a waste of time, as this route ended up being a successful one when he landed a job in Hoboken.

“I did everything in the right order and the way I was supposed to. But it wasn’t what I wanted,” Quinn said.

After sitting behind a desk and sending emails each day, Quinn felt like he needed more. By the time his 25th birthday rolled around, he was having what he referred to as a “quarter-life crisis.”

He needed to do something of major significance, and just like that, he informed his job he would be leaving to hike the Appalachian Trail. Within a couple days, he was off learning how to pitch a tent.

Quinn decided to keep a blog of his travels, and this is where he rediscovered his love for writing.

“It allowed me a chance to sit down and sift through my thoughts by putting them onto paper. It allowed me the chance to construct ideas and themes from my life that I could share with family and friends. I began to fall in love again with story, learning and the transmission of ideas,” Quinn said.

He also found out a lot about himself after spending five months alone on the trail. Quinn decided his meaning in life was always to write, read and learn while sharing his experiences with other people.

He said society is always moving quickly and constantly, with people trying to get to the top in whatever it is they do. Quinn is grateful for the opportunity the trip provided to stop doing that for awhile, to reset and to figure out what he wanted to move toward.

However, it was not all rainbows and butterflies for Quinn, as he was immediately faced with some doubt as to whether he should continue to walk.

“Let’s face it — the act of walking is not all that difficult in and of itself. But once you slap on a 25-pound pack and start walking for eight hours, it gets tedious,” Quinn said.

After weeks of being dirty, smelly and exhausted, he started to realize his body would be able to make it but wasn’t too sure his mind would.

Over time, he learned to embrace the difficulties because he knew they were just a small aspect of the totality of his existence.

“I was happy to struggle because I knew that I was alive, and I was doing something great even if I couldn’t articulate it entirely,” Quinn said.

As he does with most things in his life, Quinn decided to steer away from the norm when it came to the writing style of his book.

Instead of cleaning up his journal entries after he got home as most authors do in the traditional narrative format, he decided to leave them the way they were to portray the gritty, personal perspective of his journey.

“The natural tone, the raw journal entry, is what I wanted to convey.

“I wanted to show who I was on the trail, at my most downtrodden, my most tired and my most challenged. My raw journal entries are not going to impress reviewers looking for lyrical prose — nor were they ever intended to,” Quinn said.

However, he did want to tie together those raw, present journal entries with a perspective that could account for the trail in its entirety. So he included, at the end of each entry, a section of notes added after completion of the trail.

Quinn described this perspective as the one that attempts to tie together the entire hike, analyzing specific events from a broader scope after the fact when he had the time to think about the effect of that specific entry on the entirety of the trip.

“But ultimately, these two perspectives are one. There is a theme of paradox that runs through this book. The idea that one can be so small in the cosmos, yet existence is so significant. That we are a beautiful something with vast potential that has arisen from a great and pervasive void, a nothing.”

In all, Quinn found this trip to be successful in the sense that he found his meaning and his place in the world.

“The Appalachian Trail is absolutely beautiful, no matter where you are,” Quinn said.

“I created and solidified friendships with individuals who I will not forget for many years to come. And should I, in old age, forget them, I know that my moments with them, whether I remember them or not, have shaped who I am. The people are the best part of the trail — without them, the trail would be a much different place.”

Quinn is a teaching aide at Milton H. Allen Elementary School in Medford, as he plans to someday land a high school English teaching position. He is also working on another novel and writes short fiction whenever he gets the time.

To learn more about Quinn, visit his website www.quinnwriter.com.