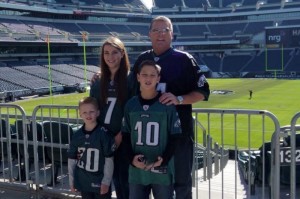 Matthew Allen Thomas was known as a friendly, fun-loving person and devoted dad. He unfortunately passed away on Sept. 9 at the age of 44, leaving behind his three children, Makenna, 18, Matthew, 16, and Mason, 10.

This unfortunate tragedy was compounded by the fact that their mother, Robyn Hatfield Thomas, had passed away eight years ago due to complications of pneumonia.

Makenna, Matthew and Mason were taken in by their grandparents, George and Shirley Thomas. An outpouring of love and support was sent to the Thomas family from various organizations and residents of the community.

To help the Thomas family, a GoFundMe campaign was started for a college fund for the three children as a way for the community to help the Thomases save for college. A goal of $30,000 is set for the cause.

“The children are fortunate to have loving grandparents, but we would like to reduce the hardship and help with the costs of raising three children, including college tuition … I know that Matt was a friend to many and will be missed dearly. Your generosity is greatly appreciated by the family as they mourn the loss of their father and son. Thank you,” the GoFundMe page says.

Matthew grew up in Willingboro, attending Holy Cross high school where he wrestled and played football. He attended Fork Union Military Academy for a year and then Rowan/Glassboro for a year, playing football there as well. He didn’t finish college, because he and Robyn married and started their family.

Robyn was known to be very devoted to her children. She had a way of making everything fun for them and was very involved with the school activities, according to Shirley.

“I think the memory that stands out the most was a special trip that Matt and Robyn took Makenna and Matthew on the year she died. They all came back from an island trip in the dead of winter and the kids remember it to this day,” Shirley said.

Her passing was very hard on Matthew and the children.

However, that didn’t stop Matthew from keeping up with his happy personality and being a great dad.

Matthew was known as one of those people who always had a smile on his face and a silly sense of humor. It made him a good salesman, as he was one with his father with AMS Mechanical.

Matthew was a huge Philadelphia Eagles fan and would love to have his friends over to watch the games. He also liked to cook. He was also known to be generous, to a fault, sharing food with his elderly neighbors and lending money to friends when he didn’t have it.

Matthew had been very ill in January and seemed to be doing well. But he started not feeling well the last month before his passing. He ended up passing on Sept. 9 due to a massive infection in his body that caused his organs to fail.

George and Shirley, having been a continuous presence in his and the children’s lives, especially after their mother died, knew immediately they would take care of them.

“There was never any question about taking in our grandchildren. We have always been very involved with them, even more so after their mother died. We are blessed to have them. They are a piece of our son that we have the privilege to enjoy and watch them grow,” Shirley said.

According to Shirley, the children are doing as well as they can, but of course it is very hard for them losing both parents.

Makenna attends Camden County College, and hopes to go into nursing. She works watching two young girls after school and then works part time at Wegmans. Matthew attends Eastern Regional High School where he is a junior, and he is interested in auto mechanics. Mason attends E. T. Hamilton School and loves video games.

“Makenna is very sensitive and giving, like her mother … Matthew is really helpful around the house … Mason, we call him mini Matt, he looks just like his dad,” Shirley said.

A few days after Matthew’s passing, George and Shirley were approached by one of their grandson’s best friend’s mother, asking them about the GoFundMe campaign, wanting desperately to help in some way. At first, George and Shirley were a little apprehensive. They felt there were many people much worse off. However, they realized the cost of three educations would be very difficult at their age, so they agreed the page could be made.

“We have been overwhelmed with the amount of support from our friends and our son’s friends. From our lowest point in life, losing our son, we have also had a high. We learned how much people loved our boy, our grandchildren, our daughter and us. It has been amazing to feel all the love we have been given,” Shirley said.

Their hope for their grandchildren is they are able to thrive despite the circumstances they are in. And they hope they never forget the wonderful times they had with both parents.

“We want Makenna to have all of the opportunity to pursue her education and further her career, if she chooses. We want Matthew to be able to decide on a trade that will give him a career for the rest of his life. And Mason we’ll have to figure out how he’ll develop for his future. We’ll continue to support them and help them when we can,” George said.

For those who would like to donate, visit the GoFundMe page at www.gofundme.com/nc433m5c. The Thomases have the Thomas Children’s Memorial Fund at TD Bank in Voorhees for those who don’t want to donate online.