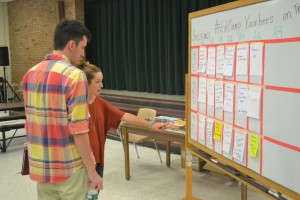 Educators are accustomed to instructing their students, but at Voorhees Middle School on Sept. 3, some teachers had the chance to learn from each other.

On that day, staff, teachers, instructional associates and even Voorhees School District administrators joined together for an Edcamp conference.

Edcamp is a Philadelphia-based non-profit organization created five years ago by a group of teachers under the theory that bringing education professionals together for user-generated conferences would lead to greater gains from their professional development.

The user-generated conferences are commonly referred to as “unconferences” where educational professionals voluntarily attend a day of informal meetings where those at the meetings are also the closest thing to a presenter.

According to eighth-grade VMS special education teacher and Edcamp organizer Julie Elliott, at the beginning of the day attendees suggested the topics they were interested in, which were then posted for different times and locations in the school.

Just some of the topics of the day included incorporating nature into the classroom, student directed learning, alternatives to paper and pencil tests, social media in the classroom and creative strategies for classroom management. 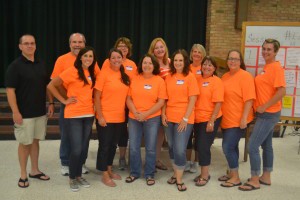 Once the list of topics was finalized, those in attendance simply attended the sessions that interested them most.

Elliot said the day was open to educational professionals from inside and outside of the district, with the goal of letting those in attendance make connections and work together in professional development beyond just the one-day camp.

“Talk to each other and email each other and bounce ideas off of each other and work on the plans and strategies together and keep it going so it’s continual professional development throughout the school year,” Elliot said.

Live notes from all the topics were also kept on digital Google Documents so those who wanted to attend meetings on multiple topics at the same time could access the notes later.

Melissa Killion, also a VMS eighth-grade special education teacher and Edcamp organizer, described Edcamp as a chance to transfer ideas and find out what works in the classrooms of others.

“This is not about somebody standing in from of the room to pitch you a product or tell you how to do something. This is you working with your fellow teachers tying to create a plan,” Killion said. 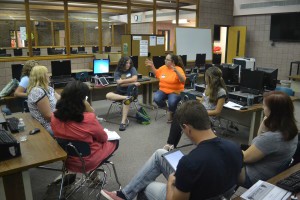 A month ago, the Edcamp organization received a $2 million grant from the Bill and Melinda Gates Foundation, which will be used in part to fund “discovery grants” for teachers to take ideas learned from EdCamps and bring them to life in the classroom.

“They’re trying to push the innovative envelope,” Killion said. “This whole idea of Edcamp is new wave and it’s the new wave of professional development, and they’re trying to take that wave and follow it through to the classroom.”

After participating in some meetings, VMS sixth-grade science teacher Joseph Sapovits said the small groups allowed participant to express their own perspectives, with ideas naturally intertwining.

“It was very interesting how one topic led to another to another, and that was really good,” Sapovits said. “Things came out of it that none of us expected.”

“I didn’t look at the clock once,” Bagnell said.

Tara Johnson, a sixth-grade literacy teacher at VMS, said being able to collaborate with others was a great benefit.

“I feel like I’m learning more because I’m not sitting there watching a PowerPoint,” Johnson said. “I’m participating in hands-on learning just like we’d want our students to do.”